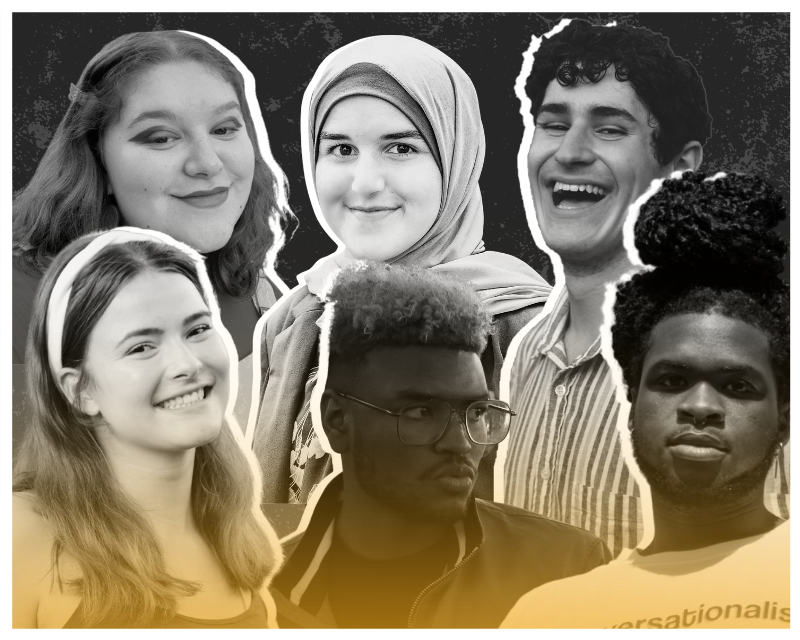 6 Community Members to Start a Conversation with

Here at The Conversationalist, we’re all about having conversations that matter and breaking open our echo chambers so that we can build a more unified world. In our community, we unite Gen Z’ers from various backgrounds, identities, and perspectives around topics that impact our generation. Still, we’re also about making connections and creating friendships that transcend politics and identity. Through events, conversations, and content that help our members get to know each other, we’re building a space that’s all about being welcoming, safe, and supportive.

As you dive into the TC community, here are 6 members you can start a conversation with: ‍

Nicholas Kaplan is a junior at Broad Run High School in Northern Virginia. Nicholas is a genuine Conversationalist who is passionate about photography, cybersecurity, theology, cooking, and camping. For Nicholas, the TC community is about seeing people as humans and not just their politics. He’s grateful for the opportunity to learn how to engage in conversations, not to win or prove his opinions are best, but to genuinely learn from others. He is a proud member of the TC advisory board and appeared on our Voting panel last fall. Offline, Nicholas is an active Eagle Scout.

Safiya Khan is a rising sophomore at George Mason University, where she studies Government and International Politics. She is passionate about interfaith, poverty, self-care, poetry, and embracing discomfort. She also appeared on our Sustainability and Environmental panel and believes that each of us has a responsibility to do our part in protecting the planet. For Safiya, unity means "building bridges even though we know we have walls" and "being empathetic and even PHYSICALLY putting yourself in people you disagree with's shoes to understand where they are coming from.". You can find her in TC’s advice room dishing out her words of wisdom and kindness or posting supportive messages in the Check In room.  Safiya is an avid volunteer and has helped organize Eid toy drives, raised $2k for refugees during high school, and tutors online.

Sadie is a college student from Texas who is committed to using her voice to speak out about causes that matter. She’s only been part of TC for a few months, but she has already learned so much from many different members. Sadie remembers feeling loved and supported following a powerful conversation about eating disorders and leaving a conversation about abortion with a broken echo chamber. Sadie's favorite thing about Gen Z is our ability to come together around problems, such as the Black Lives Matter movement. When she's not tackling essential topics in the TC community, Sadie finds joy in cooking, meditation, crystals, and talking with friends. She looks forward to graduating from college and living a life of happiness and contentment.

Zahier is a student at the Savannah College of Art and Design in Savannah, Georgia, where he studies Film and Television. Zahier found his voice when he started to learn more about politics, and now, you can find him initiating important conversations with other TC members. He has also participated in several of our political panels. He is committed to breaking open his echo chamber by welcoming all thoughts and opinions into conversations. Outside of TC, you can find Zahier working on his animated TV series. He hopes to see more media and television normalize mental health care and therapy, and he wants to be part of the change.

Bella is a senior at Manchester High School who is passionate about feminism, the environment, and ending political gridlock. Bella is an active TC Conversationalist and appeared in our Pop Culture and Politics panel. In addition, she is the Marketing Director at The Green Consumer Project, a youth-led organization dedicated to streamlining access to sustainable brands. As a political moderate, Bella wants other Gen Z’ers to know that centrists aren’t apolitical, are committed to getting things done, and are passionate and driven toward making change. Bella said that having conversations at TC makes her more hopeful for the future. She is looking forward to attending Simmons College in Boston this fall and hopes to be a U.S. Senator or Public Relations specialist in the future.

Travis-Jordyn is an actor, singer, dancer, and model currently based in the Bronx, New York. Ze graduated from Wagner College in 2020, where ze used the performing arts as a medium for activism. Ze is passionate about social justice and participated in several campus organizations such as the Black Student Union, Iris Alliance, mentoring programs, and various fundraisers. Travis-Jordyn is a passionate and compelling Conversationalist who believes discussions and protests are valuable outlets for change. You can find zir having conversations in Geneva about identity, race, sexuality, mental health, and more. Ze is also a member of the TC’s advisory board and appeared on our Gender Equity panel this past winter.