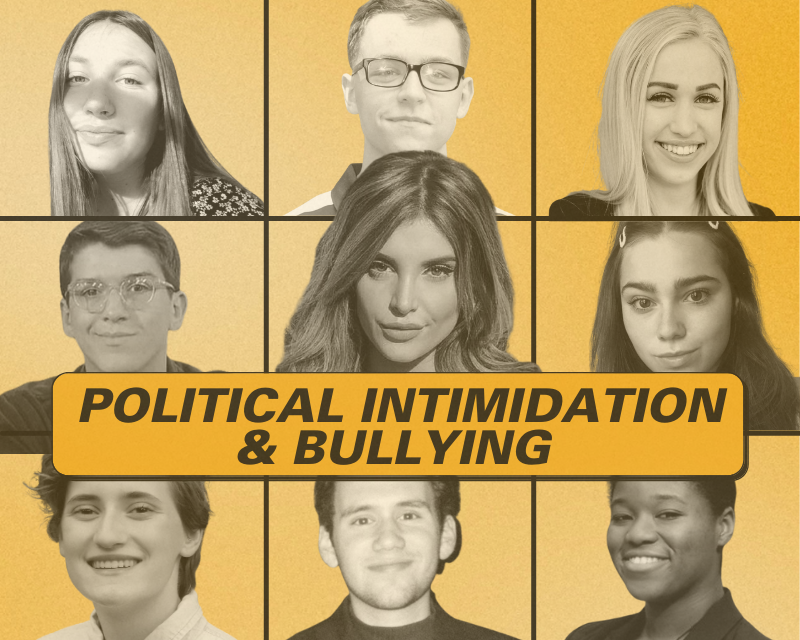 Bullying is an issue that young people have always dealt with, and Gen Z isn’t exempt from feeling its impact. As the most online generation to date, it’s particularly pervasive. In the context of politics and days leading up to the election, it has a whole new meaning.

On September 8, The Conversationalist brought together a group of whip-smart Gen Z’ers who shared their perspectives on bullying and political intimidation in conversation with celebrity host Hana Giraldo and The Conversationalist Founder and CEO Sophie Beren. The panel centered on the idea that engaging in discussions, instead of arguments, with people who have different opinions will allow us to create a political landscape that promotes unity.

Our panel host Hana is an actress, comedian, and TikTok star who made a name for herself through her viral comedy skits. She’s also known for her vulnerable honesty. She has publicly opened up about her experience growing up in the spotlight as Pat Benatar and Neil Giraldo’s daughter and dealing with bullying throughout her life. She had plenty of wisdom and support to share with the TC community.

What does bullying mean to you?

Hana kicked off the conversation by asking the panelists to provide their definition of bullying. As each panelist shared their point of view, she was the ultimate hype woman.

Megan Olson, a Republican candidate for the Minnesota State Legislature and recent college graduate, described bullying as belittling someone for their opinion or over a specific scenario.

Abigail Leyden, a high school student from Chicago, Illinois, described bullying as making fun of someone over what they enjoy or are passionate about.

Alexandra Cohen, a high school senior from Los Angeles, countered against the idea that bullying was defined by being a repeated action, which is a narrative she said she learned at anti-bullying assemblies at school. “I think that in the digital age, bullying doesn’t have to be a recurring thing,” she said. “One instance could still be valid.”

Kaitlyn Reynolds, a senior at Georgetown University and the Operations Director for Gen Z GOP, agreed with the previous points but wanted to add that bullies often come from a place of insecurity.“There have been many instances in my life where being opposed by someone who doesn’t share my values and the premise is they are insecure in their own beliefs,” she said. “They challenge my opinions, or they challenge what I believed.”

Jonny Gerstein, a student at Hamilton College who serves as the President of the College Democrats of New York, said a situation constitutes bullying if the victim sees it as hurtful- intention doesn’t always matter.

Kait Ahern said 20-year-old environmental activist and community organizer that bullying comes from a place of misunderstanding or fear. “Political intimidation happens when someone is afraid of someone’s perspective and would rather attack them,” she added.

Have you ever been bullied for your political views?

With that, Hana shifted the conversation to bullying in politics or political intimidation, which candidates have described as involving rumors, name-calling, and blame-shifting.

As a candidate for public office and a student,  Megan spoke to her experience on the campaign trail and on college campuses. “People try to invalidate certain experiences I’ve had,” she said, noting that some people try to suggest her beliefs are not her own.

Hana said that Megan is probably going to be president.

Abigail said she’s seen people say on social media that they can’t be friends with a person with certain beliefs, which she believes isn’t fair.

Alexandra agreed and said people at her school would instead attack her before having a conversation.“I’m loud and proud about my political beliefs,” she said.

“In a culture that’s so consumed with technology, it’s easy to forget the power of words,” Kaitlyn said in response to Alexandra. She said people use terms like ‘racist’ and ‘nazi,’ and she wants people to contextualize what they say.

Jonny said he thinks political intimidation doesn’t just happen across the aisle. He’s seen it within liberal circles.“If we dismiss people, we’re not going to get anywhere,” he said.

As a woman in politics, Kait said she’d experienced bullying from people who dismiss her as being overemotional.

Is this a gateway to cancel culture?

Kaitlyn, a conservative Roman Catholic, said she has been on the receiving end of cancel culture. During the Brett Kavanaugh controversy, she shared an article on social media that led her to experience intimidation from a high school class member who shared her social media post and others. “How can we have a productive conversation if you are trying to get our graduating class to hate me?” Kaitlyn said.

Why is Political Intimidation dangerous?

“Bullying someone doesn’t change their opinion,” Abigail said. “It just oppresses how they feel.”

Building off of her comment, Abigail said political intimidation simply shuts things down instead of “reframing the way we have conversations.” She said that coming at it as an argument is a flawed approach. “Let’s discuss with the goal of making each other better,” she said. “Good policy comes when both sides compromise.”

Have you ever felt political pressure from friends or family on social media?

Jonny said that as a college-aged male liberal, he finds that if he posts something related to his political views, his friends can’t take it seriously due to his gender identity.

Kait offered a counterpoint to Jonny based on her own experience as a liberal. “Many people in our generation who are on the internet share our ideas and ideologies, so we end up in kind of an echo chamber, where no one has intense conversations,” she said. “When we do have real conversations where we have to listen to people who are different, it makes them uncomfortable, and people don’t want to deal with that.”

Speaking from her perspective as a moderate liberal, Alexandra believes the Black Lives Matter movement, while necessary, has led to performative activism due to the pressure to post on social media, which is not productive.

Abigail agreed. She said she saw a lot of misinformation going around because of the pressure to share social media posts. “No one’s working to see if what they are posting is true because they are worried about what other people think,” she said‍

Zeb Harshbarger, an Economics major at Lycoming College and Pennsylvania State Chair at Young Americans for Liberty, said he’s struggled with this as someone who has right-wing beliefs at a liberal college. He finds that some of his friends get overwhelmed and defensive when he tries to explain himself. “I’ve lost several friends because they weren’t willing to accept the fact that I had different views from them,” he said.

What have you learned?

“We can’t assume people’s opinions,” Kait said. “Someone likes someone [who identifies] with a party, and we assume we know why they feel what way.”

Building on her point, Abigail said that, for example, it’s not fair to call all conservatives racist or homophobic. “We need to hear everyone’s stories instead of assuming everyone in one group has the same ideas,” she said.

As a political candidate, Megan wants everyone to work to change the political landscape.

Alexandra said she learned that political bullying happens on both sides and has to do with echo chambers. “It’s more productive to discuss than debate,” she said.

Props to our panelists to engage in a difficult conversation and encourage Gen Z to empathize with other people’s experiences.

After the panelists signed off, Hana joined Sophie for a Q&A session. She discussed how her personal experience with bullying as a child has informed her advocacy, her comedy career, and how she deals with politics as an influencer. She was also briefly joined by her boyfriend, Disney Channel icon Kyle Massey, and everyone pretty much lost their chill because who didn’t love Corey in the House? It’s a party every week, baby!!

Before signing off, Hana dropped some advice for anyone experiencing bullying of any kind. “The people who are mean to you don’t matter. The people who love you matter. Stick with them,” she said. “Love yourself, and don’t let anyone tell you you can’t do anything.”

Join The Conversationalist for plenty more events in the weeks ahead, featuring important conversations about topics that impact Gen Z’ers. Follow The Conversationalist on Twitter,  Instagram, and TikTok to learn about how you can enter to be featured on a future panel and text UNIFY to 1 (877) 222-1119 to join our community and connect with members.