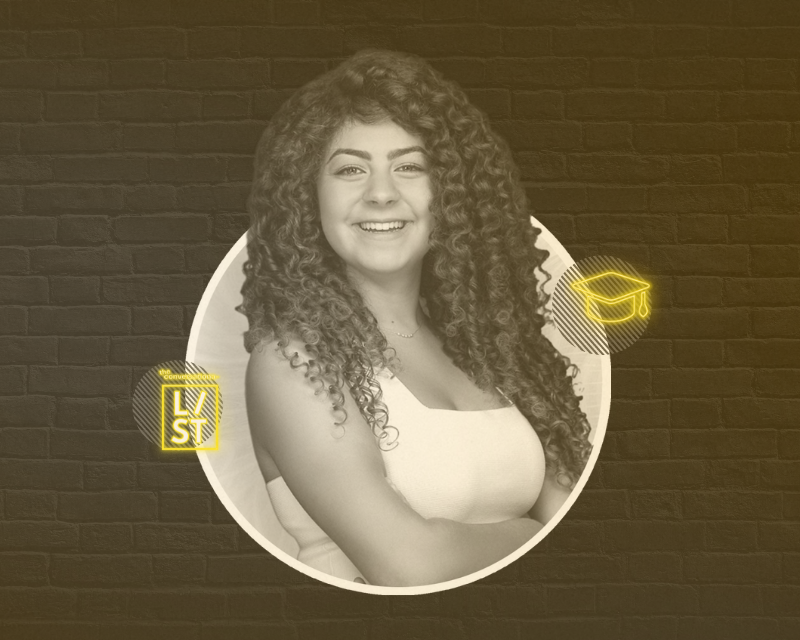 Telling my own story

At seven, Egyptian-born Jana Amin met the illiterate daughter of a hair-dresser in her community, whose family simply could not afford to send her to school. Struck by the experience, Jana remembers walking into school the next day and feeling empowered by having access to learning opportunities. “Learning felt like a superpower,” she said. “Sitting in class, I felt invincible.”

“Soon, I realized, it's not enough to become a powerful woman. I must use my voice for change.”

At the age of ten, Jana helped feed a revolution by helping her grandmother make kahk, an Egyptian biscuit for Arab Spring protesters. While they baked, she recalls feeling mesmerized by the sea of women in bright red hijabs on television and scanning their faces for her aunt. “As they toppled a regime, I vowed to become an Egyptian woman like them: driven, empowered, and impassioned,” she recalled. “Soon, I realized, it's not enough to become a powerful woman. I must use my voice for change.”

After moving to the United States, Jana didn’t see or talk to many women of color who were using their voices for change, which made her feel isolated and alone. Her feeling inspired her to take action for herself and start on her advocacy journey for women’s education. “I began to doubt if young women and girls did play a role in the decision-making and peace-making processes,” she said. “My advocacy work began by telling my own story and the stories of the other Arab, Egyptian, and Muslim women I knew.”

A purpose behind me

Now, Jana advocates for gender parity, girls' education and works to change the narrative around Muslim women. Through her #17for17 initiative, a virtual event bringing together 17 speakers representing 17 countries to stand in solidarity with girls around the world, and her advocacy efforts with her initiative Bantoota, she seeks to help girls uncover their vision and a voice. She also founded the podcast UnTextbooked, which covers women’s rights in the Middle East.

“All women and girls deserve the opportunity to feel invincible."

As an exceptional Gen Z’er using her voice for good, Jana was honored for her work as part of The ConversationaLIST in the Education category.  “All women and girls deserve the opportunity to feel invincible, whether in classrooms, labs, boardrooms, meetings or even homes--and I am honored to help them get there,” she said.

Jana knows that finding one's voice can be isolating and challenging. Still, she found that it became easier for her once she started using her voice to advocate for solutions to the problems that directly affected her community. “I had a purpose and army behind me,” she said.

In five years from now, Jana hopes to continue advocating for young women and girls globally by developing and supporting local, grassroots level programs that allow all women and girls to feel invincible and create tangible change.

Many of the causes that Jana is passionate about requires the involvement of youth voices. She resonates with The Conversationalist's mission of centering young people in developing solutions to today's most pressing issues, primarily through unification and in-depth conversation.

“As Gen Z’ers with unique experiences and digital expertise, we are positioned to help build the unified world we want to see.”

When Jana envisions a unified world, she hopes that decision-making bodies will represent the communities they serve. She also imagines kind and productive conversations and solutions that help everyone. “As Gen Z’ers with unique experiences and digital expertise, we are positioned to help build the unified world we want to see,” she said. “Our generation knows that tangible change is possible when we come together in support of it. I only hope Gen Z will continue to wake up to our immense power and use it for good.”

To break open her echo chambers, Jana challenges herself to genuinely listen to those with opinions different from her own and seek out diverse media.

Big snaps to Jana Amin as she pursues a more educated world for girls everywhere. Keep up with her on Instagram and follow UnTextbooked to learn more about her work.

Come hang out with Jana and all of our LIST honorees! Join us in Geneva and follow The Conversationalist on Twitter, Instagram, and TikTok to stay up to date with all of our future events.