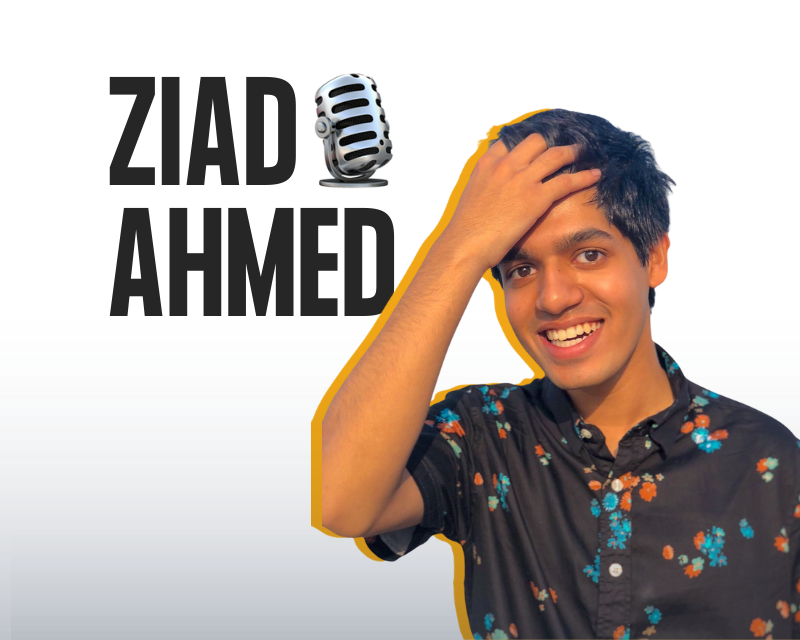 Let’s Talk The Personal and Political with Ziad Ahmed🎙️

22-year-old Ziad Ahmed will never forget the 2016 election and how it prompted him to break out of his political and geographical echo chamber. He remembers realizing that people he was around every day didn’t have the same opinions as him, but he didn’t know because he stayed within his bubble.

“Am I having conversations with acquaintances that I’ve come into contact with?” he recalled thinking at the time. “‘What am I missing out on in terms of development and in terms of empathy when I don't?’ And that was a huge, huge wake-up call for me.”

This week, we sat down with Ziad on the latest episode of The Conversationalist Podcast. Ziad is an entrepreneur, changemaker, and natural conversationalist who uses his platform to amplify Gen Z voices. Through the experience he’s gained working in politics and tackling tough conversations, Ziad reminds us that while we can’t choose the labels cast upon us, we can choose how we uplift others and create spaces for everyone to be safe, seen, and heard.

Ziad is the CEO of JUV Consulting, a Gen Z consultancy that works with clients to understand young people. Ziad is also a full-time senior at Yale, a Forbes 30 Under 30 honoree, and the Founder of Redefy, a youth-run non-profit committed to furthering equality. He has given four TEDxTalks, has spoken at the Council on Foreign Relations, has commented on networks such as CNN, and has written for Teen Vogue.

In proper TC fashion, we opened the conversation by breaking the ice. Through some rapid-fire questions from Sophie, Ziad revealed that he lives in New York City and his most used emoji is the red heart. He said he’s made up of all of the above-circumstance fate, luck, privilege, emotion- and none of the above. He said that he could talk about just about anything for 24 hours straight (a true conversationalist!), and his echo chamber is mostly progressive and made up of people who have privilege at some level. However, he is constantly making an effort to get out of it.

Ziad shared his social media experiences and expressed that he struggles with feeling like platforms don’t allow people to be their most multifaceted and dynamic selves. He also spoke about how navigating the world as a political being, and the intersection of his identities empowers him to speak up and educate himself about his passions. “I'm somebody who is deeply political,” he said. “As an American Muslim, as a progressive, as somebody who has friends of all different identities and backgrounds who sees the impact that policy [and] systemic inequity has. For me, social media has always been a tool to speak up. I think that, especially as a person of privilege, as I mentioned, it's my responsibility to use my privilege, to use my platform, to shed light on things that people should be talking about, that we should be activating around.”

Here at TC, we have a whole room in our community dedicated to Hot Takes, where members can share a controversial thought, question, or icebreaker about something they believe. TC Community Member Kaitlyn Levine shared that she thinks you can guess an entire person's identity based on their political ideology.

Ziad wholeheartedly disagreed with Kaitlyn and encouraged her to watch an event he did through JUV, in which four Gen Z women shared their perspectives leading up to the election. They were all voting differently but agreed on many systemic issues but simply saw different ways to address them. “I do not think that we can look at one part of somebody to assume everything about them, ever,” he said. “I think that we're all complicated. If I've learned anything, it’s that, as I've got older, it's that assumptions are a dangerous thing.”

Sophie agreed with Ziad’s take and acknowledged the importance of having people from all walks of life as part of our TC community.

The first piece of advice Ziad wanted to share is that, in his experience, most advice is bad advice because he believes that it’s dangerous to assume that a person’s experience is generalizable. It’s impossible to understand someone else’s life. Still, he shared that he wished he could go back and tell his younger self to avoid striving for perfection. “I'm never going to be ‘everything,’ and I've never been ‘nothing’ and I never will be ‘nothing,’” he explained. “We're all just ‘something,’ and that has to be good enough. And maybe being ‘something’ doesn't sound that sexy, but maybe that's okay.”

Finally, he shared some advice Dalia Michaud gave him- “You were inconsequential until this work, but this work is of consequence.”

Ziad invited said anyone who wanted to “bore yourself” can follow him on social media or reach him by email. He wants to make genuine connections with his peers online.“I'm all about trying to build a community where I can and where I [can] do so,” he said.

He also directed listeners to learn more about JUV Consulting, which is currently hiring consultants. Anyone interested in getting involved outside of consulting can check out Redefy.

Snaps to Ziad for sharing his wisdom with us today! We couldn’t be more grateful to have him in our world. Keep up with him on Instagram and learn more about his work here.

‍
Listen to The Conversationalist Podcast on Apple Podcasts, Audible, Spotify, and more. We’ll see you next week!