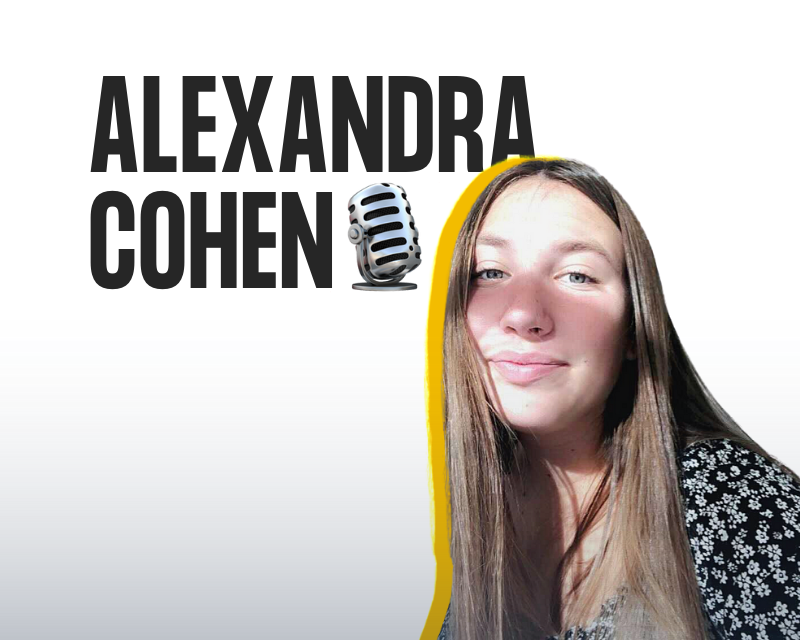 High school senior Alexandra Cohen has always been a self-described pot-stirrer. “I've been the dissenter in so many different ways,” she said. “I'm not always agreeing with people, and I've been able to challenge people on their beliefs and have my own beliefs grow and so much.”

With this mindset, Alexandra said she can have better conversations and understand more about the people and things around her. “Not everyone in the world thinks exactly like me,” she said. “It's something that we all learn at some point, and I think that learning that for me was life-changing. I realized that I could talk to so many people, and I didn't have to hate them because they felt differently than I did.”

This week, we sat down with Alexandra on the latest episode of The Conversationalist Podcast. She is a high school senior from Los Angeles. She shares her experience as one of the only Jewish students in her Catholic high school. She and Sophie also talk about the similarities they share at different stages of life and how both of their school experiences led them to feel more connected to their Jewish identities.

Alexandra uses her voice in written advocacy and has been published in numerous publications, including the Los Angeles Times. She has also served as a member of the California Youth Supreme Court and was selected to represent California in the National Judicial Competition. In addition, she gives back to her community through her involvement with the Harold Robinson Foundation and Six Feet Supplies. She is also an intern at The Conversationalist and advocates for bipartisan unity and pragmatism.

In proper TC fashion, we opened the conversation by breaking the ice. In a series of rapid-fire questions, Alexandra shared that her favorite emoji is the Gen Z laughing emoji, not to be confused with the millennial laughing emoji. Her favorite thing to talk about is political ideology and the people behind them, which she can do through TC’s Geneva community. Her most controversial take is that chicken is not that good, and she can only eat it in nugget form.

She said that what makes her Alexandra is her ability to talk to other people who are similar and different from her and advocate for her passions. “I love finding commonalities with people,” she said.

Finally, she offered some insight into her echo chamber, which she said she’s been reflecting on as she prepares to graduate high school and attend college in the fall. “One of them is my Catholic school, which is this super conservative bubble,” she explained. “It's very rooted in tradition, and that has been so different from my home life, where I have extremely liberal Jewish parents...Lastly, I have been super involved throughout my middle school and high school careers in Youth & Government, and I've developed this radically liberal, youth-dominated echo chamber. Being in three echo chambers has allowed me to be uncomfortable in so many different situations. [I] try to find commonalities with people and  hear other people out who think differently than me as I start to leave these echo chambers in different social circles and, and even in Geneva.”

Alexandra is currently a senior in high school, preparing for college in the fall. She attends an all-girls Catholic High School, where she is one of the only Jewish students. Through the experience, she’s gotten closer to her faith and had the opportunity to share it with her classmates. “It's broken my religious echo chamber, which is not something that people go out of their way to break,” she said.

Sophie related to Alexandra’s experience and recalled being one of the only Jewish students at her school in the midwest. “I was so ashamed of who I was, so it's so awesome hearing how it's made you feel more connected to your Judaism,” she said. “Maybe being one of the only ones allows us to feel more closely connected or sometimes even responsible to kind of uphold Jewish ideals.”

Alexandra also shared the story behind her commitment to bipartisanship which started when she ran for a student government position. She leans left politically, but she wanted her politics to be pragmatic, inclusive and rooted in compromise. She was also inspired by her dad, who encouraged involvement in politics. "In 2016, I started watching the news with him, and I got so angry at Donald Trump,” she said. “I knew that it was my calling to go in and do politics, but it wasn't my calling to be so radical and, and be mean to people who disagreed with me,” she said. “It was my calling to make peace with both sides and try to find solutions that worked for everyone.”

She also shared her experience finding her voice. She recalled writing a strongly worded email to American Girl when they discontinued her favorite doll. Then, when she was in middle school, she remembers getting in trouble by going against a sexist dress code and having conversations with her principal. After attending public school in ninth grade, she didn't feel like she was getting the intellectual stimulation she needed and wrote essays to her parents about private schools in her area. “I realized I had the power of my pen, and I could write about things that were important to me,” she said.

At the beginning of the pandemic, Alexandra wrote an article for the LA times advocating for spending on the environment. It was the first time she truly felt heard. “I kept using my pen to advocate for things,” she said. “I remember writing about antisemitism and writing about RBG’s death, and so many different things that were so important to me and that maybe my work could change one person's beliefs, or maybe they could just hear me out and listen to me. That was so impactful.”

As Alexandra wraps up her high school journey, she’s realized she has big ambitions around using her voice for good and that she hopes to continue growing and learning for the rest of her life. “I love school because I love to learn and stuff,” she said. “Not just because, 'Oh, I'll get into a good college' or ‘I'll get a good grade,’ but I just want to keep learning and absorbing,” she said. “The Geneva community is like a 24-hour way to continue to learn and absorb. I think that I've realized that throughout high school, that's something that I want to keep doing. As soon as I leave the classroom, I don't want the learning ever to stop.”

Here at TC, we have a whole room in our community dedicated to Hot Takes, where members can share a controversial thought, question, or icebreaker about something they believe. This week’s Hot Take was brought to us by community member Amma who shared that men should be given birth control to prevent pregnancy.

When it comes to finding her voice and her place in the world, Alexandra has found that writing is the best outlet for her advocacy. “In a way, advocacy is venting,” she said. “Advocate in any way you can, whether that's speaking, whether that's having a conversation in our app, writing, going live on Instagram, going on Clubhouse or TikTok, just do it and use your voice in any way possible.”

She also wants other Gen Z’ers to know that it’s okay to be the dissenter. “Sometimes it's okay to provide that other perspective, whether or not it's your perspective, just to understand every side of the situation,” she said. “As we saw with that hot take, any answer is a good answer. I think that it's so important to recognize that too.”

Alexandra said she’s still figuring out how to navigate difficult conversations, but she tries to heed her grandparents’ advice of learning from listening. “I remember we had an And We’re LIVE! a couple of days ago, and I didn't know much. I sat there, listened, and absorbed, and that's such an important role in a conversation. It’s a role that we don't idealize so much, and we really should do more because we all should be listeners before we're educators and speakers.”

Alexandra is currently an intern at The Conversationalist, where she said she loves working with Sophie and the team every day. She encouraged everyone to follow TC on Instagram and TikTok and to join the Geneva community. “Go and join right now and join in on the conversation,” she said.

Personally, Alexandra is focusing on enjoying her last semester of high school. “It's a little bit of a weird year for everyone,” she said. “So I'm not working on anything too big right now. I'm just trying to soak up being a kid.”

Sophie added that Alexandra is low-key famous on TikTok, where she makes day-in-the-life videos and told everyone to check out her content.

Snaps to Alexandra for sharing her wisdom with us today! We couldn’t be more grateful to have her in our world. Keep up with her on Instagram to learn more about her work.

Listen to The Conversationalist Podcast on Apple Podcasts , Audible, Spotify, and more. We’ll see you next week!