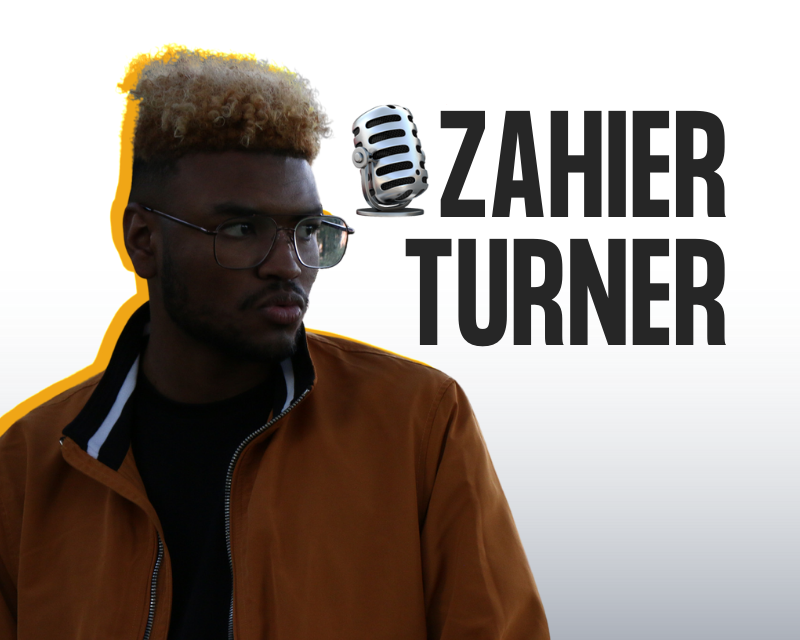 Last year, college student Zahier Turner identified as a liberal. But now, he’s a conservative. His journey began by following the Black Lives Matter protests last summer. He wanted to learn more about what was going on and develop solutions to the protesters’ concerns.

He started to have conversations with friends who had different beliefs and perspectives. One day, he went on Instagram live with a Black conservative friend to discuss police brutality. For Zahier, this changed everything. “I had this conversation with him and he just kept asking me questions,” he recalled. “I've never been challenged on my opinions before politically until this moment. So that gave me the opportunity to reflect and ask myself why I thought some of the things I did. We ended up agreeing on the fact that police brutality is an issue, but we should make it just a police brutality issue and not a race issue.”

This week, we sat down with Zahier, a college student, activist, and TC community member who is passionate about having conversations that break open his echo chamber. Zahier opens up about his journey as a Black conservative and the struggles he experienced moving from one end of the political spectrum to another. His journey offers an important reminder that it’s important to normalize changing our opinions as we explore different ideologies and how we should all do our best to listen and be open to multiple points of view.

Zahier is a 21-year-old studying at Savannah College of Art and Design. He’s a natural-born creative with a passion for art in almost any form, including drawing, acting, singing, fashion, screenwriting, and more.

In proper TC fashion, we opened the conversation by breaking the ice. In a series of rapid-fire questions from Sophie, Zahier shared that he can’t live without a burrito bowl from Chipotle, and he spent his last birthday with his family. He is who he is because of his authenticity, and his most controversial take is that he’s a conservative.

Zahier expanded on his journey as a conservative. He started to ask more questions and seek more information about other people’s beliefs after breaking his echo chamber. But, unfortunately, he found that as a result, he would be unfriended, blocked, or called names by people who disagreed.

Sophie brought up the concept of being placed in a box, where people don’t seek to understand a person’s whole self. Zahier said he resonates with this concept because people assume he is a conservative for the sake of starting controversy or that his political beliefs are his entire identity. “If you asked anyone in real life, they would know me from being an artist, being a creative person,” he said. “I have a song on iTunes, and all these different art forms I love to do. So many people just put me in the box of ‘he thinks this way, he thinks that way.’ But in reality, I'm a three-dimensional person, like everyone else.”

Zahier is an active conversationalist in the TC community, but he said it took some time to master difficult conversations. For example, he used to be hurt if someone disagreed with him but now, he realizes it’s normal. “We're all different,” he said. “We all have our individual experiences. So, I'm not going to take it personally. I'll just kind of tell people what I think and why I believe it, but ultimately I can't control what other people think. So, you have to pick your battles.”

On that note, Zahier said he tries to think more carefully about his words and actions during tough conversations. He said he used to send heated messages to people, but he’s evolved from that. “So now, having these conversations on The Conversationalist, I don't send those long and unproductive texts,” he said. “Instead, I just think about my feelings, why I feel the way I do. ‘Is this question productive? Is it because I want to learn something?’ It’s taking a step back and just asking what you want to achieve, and then it goes back to picking your battles if you're not sure if the person's going to want to engage in a conversation.”

Finally, he shared that people choose to be kind and aren’t afraid to say what they believe in a unified world. However, he added that his personal experience with cancel culture has changed his view on unification because he feels it’s created a standard of fake apologies and pandering rather than genuine accountability and kindness.

Here at TC, we have a whole room in our community dedicated to Hot Takes, where members can share a controversial thought, question, or icebreaker about something they believe. This week’s hot take was brought to us by TC community member Anthony, who said that no politician should hold office for multiple decades.

Zahier, one of the most frequent posters in the Hot Takes room, agreed with Anthony and said eight years feel like a good standard term limit. “I feel like when it gets past 20, it feels like a monarchy at that point,” he said. “Granted, people are voting, but at the same time, there should be a limit, in my opinion.”

Sophie invited listeners with thoughts on this take to join the conversation in Geneva.

Zahier encouraged Gen Z’ers looking to find their voice to work on loving themselves enough to trust their intuition and opinions and be confident in expressing themselves. “Then it doesn't matter what so-and-so says about you,” he said. “It doesn't matter if anyone cancels you if you're confident and know who you are and what you think. I feel like that's powerful.”

Zahier believes in the importance of having conversations from every perspective, even when you disagree. He said it’s essential to listen to others to create effective change, especially when it comes to Black issues. “I feel like it's so important to talk to all Black people, not just ones that agree with one perspective, but every perspective as a whole,” he said. “Black people of different ideologies solving issues is way more effective than a bunch of different races of the same ideology trying to find a solution.”

Finally, he offered some advice for navigating cancel culture. He said he used to be quick to assume someone was a bad person based on his preconceived notions. “Ask yourself, ‘why are you canceling this person?’” he said. “‘Do I have all the information? Am I canceling this person because they did something wrong, or am I canceling this person because I just want to bully them?’ I believe those are just important questions to just really ask yourself. I think that you can cancel someone by no longer supporting them, but then it draws a line when you start commenting on their stuff or making hate pages.”

Zahier invited listeners to check out his Instagram where he posts all of his hot takes, art and opinions.

Snaps to Zahier for sharing his wisdom with us today! We couldn’t be more grateful to have him in our world. Keep up with him on Instagram to learn more about his work.