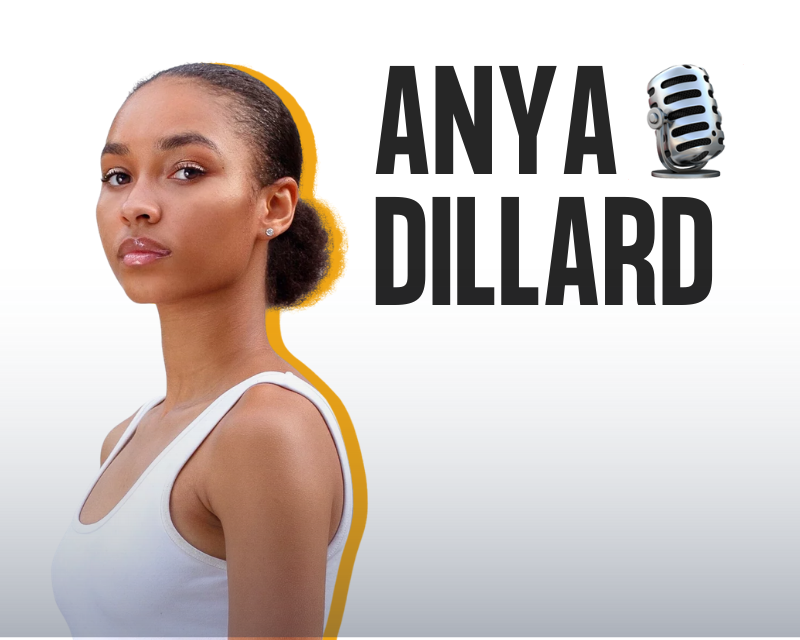 Anya Dillard has been fostering empathy and using her voice to incite change since she was five years old. While playing with some of the young patients at the hospital where her mother worked, Anya noticed a lack of toys available for the children to play with. Wanting to solve the issue, she began raising money to gift toys, blankets, musical instruments, and much more to children and their families for the holiday season.

“I know it's really wild because I don't think that most people would imagine, like, a five-year-old even thinking about other people,” said Anya. “They just want to play with toys and be cute and get what they want.”

Since then, Anya has amassed large amounts of funding and sponsorships every holiday season to be able to provide resources and gifts. But she didn’t stop there. Anya is now an 18-year-old activist, philanthropist, and founder of The Next Gen Come Up, an organization dedicated to encouraging youth activism and community service through media and creativity.

In this episode of The Conversationalist Podcast, The Conversationalist Founder and CEO Sophie Beren sits down with Anya Dillard, an 18-year-old activist, philanthropist, performing artist, entrepreneur, content creator, and aspiring filmmaker. Anya has already achieved so much at her young age. This past year alone, Anya was named a 2021 Human Rights honoree from The Conversationalist and received both The NJASC Student of the Year Award and the BLACK GIRLS ROCK Social Justice Grant.

Best known for co-organizing the largest civil rights protest and the first-ever Juneteenth Celebration in her town’s history, Anya has been featured in The Washington Post, as well as Elle, Seventeen, and Glamour magazine for her extensive human rights and philanthropic work.

Anya shares some great tactics for navigating difficult conversations, as well as how to get started as a changemaker.‍

In proper TC fashion, we opened the conversation by breaking the ice with a series of rapid-fire questions from Sophie. Anya described her echo-chamber as “extremely pro-Black” and shared that if she could change one thing about the world, it would be the lack of empathy that exists today.

“Because I think that a lot of the issues that we will end up talking about on this podcast and many more, would not exist if people valued empathy more,” said Anya. ‍

Growing up, Anya shared she originally wanted to be an environmentalist. Most of her classes were focused around STEM and she frequently participated in STEM programs where she realized she was the only Black girl in a room of 300 people.

Anya had never experienced a lack of diversity before, having grown up in what she described as a “diverse” community. But her realization made her wonder why there was such a large gap between STEM programs and people of color.

“I started to realize that race had such a huge effect on people who look like me across the nation,” said Anya. “I had always been very proud of my heritage. My mom is Guyanese, so I live in a West Indian household and I've always been super proud of that. I realized that society was actively working against that pride in so many other communities around the world, and that's when I really wanted to start talking about it and get involved.”

Anya took a step back from STEM and got involved in programs like Black Girls Lead, a leadership conference dedicated to uplifting the accomplishments of extraordinary young Black women, fully immersing herself in the activism space. She began speaking across the country, and even across the sea in the UK, about activism.

As a creative change agent, Anya believes in utilizing art to disrupt narratives and create safe spaces for marginalized groups of people, which lead her to found The Next Gen Come Up.

“I started to kind of utilize the artsy part of myself to talk about those things and to get people's attention and to encourage other people to talk about those things as well,” said Anya. “Ultimately, my goal now is to build it into a platform that is extremely outreach based and that encourages community service efforts in countries across the world, as well as states all over the nation.”

Anya shared she has learned a lot about how to have difficult conversations with people of differing views throughout her experience as an activist and philanthropist. “We all come from so many different things and people's experiences change their viewpoints constantly,” said Anya. “So it's not up to us to change anyone's viewpoint. It's not up to us to even reeducate everyone constantly. It's ultimately to gain a level playing field and to understand that, regardless of what our political beliefs are, we can find a middle ground. We can find something to relate to each other on or to agree with each other on.”

Here at TC, we have a whole room in our community dedicated to Hot Takes, where members can share a controversial thought, question, or icebreaker about something that they believe in. This week’s hot take was brought to us by TC Community Member Cynthia, who believes there are certain things that people just shouldn’t debate about, such as people’s rights and trauma. Anya agreed.

“I think that when it comes to people's experiences, I don't necessarily think that in every sense it's people's place to say whether or not those experiences are valid. I think that the conversation needs to become more about what have you learned from those experiences?” said Anya. “And I think that, you know, it's a more compassionate way of going about understanding what people have been through rather than thinking that you're in a position to tell them to minimize how they feel about their experience or to completely interpret it, you know, a different way.”

If you want to keep up with Anya and all of the incredible things she is doing, you can follow her on LinkedIn, Instagram, and Twitter. And to learn more about The Next Gen Come Up and to learn how you can use your voice and creativity to make change, visit their website.

Major snaps to Anya for everything she is doing to make the world a better place. We cannot thank her enough for being a part of our world.