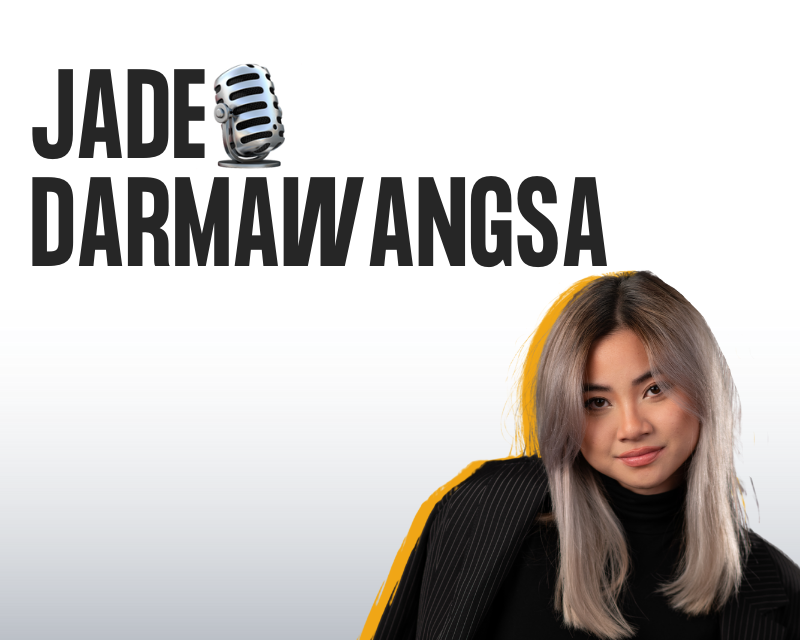 When Jade Darmaswanga started creating content when she was only nine years old, she was making videos to recommend products to her followers. Eventually, she started selling her own products, including her childhood toys online. She didn’t realize it at the time, but this was her first foray into content marketing.

When Jade was just 16 years old, she dropped out of school and founded her own e-commerce company. From the outset, she embraced her less-than-traditional path and worked tirelessly to grow her platform. “I just loved it,” she said. “It did not feel like work. I was making money, but I didn't do it for the money. So when I started my company, it wasn't this big vision of becoming a billionaire. It was just, ‘how can I fund what I love to do?’”

This week, we sat down with Jade on the latest episode of The Conversationalist Podcast. She is a social entrepreneur, speaker, influencer, and TikTok star. Jade got started in the e-commerce space at only ten years old and now uses her platform to share her wisdom with others. She shares advice on navigating imposter syndrome, the value of being an “imperfect” advocate, and how to get started on your journey toward using your voice for good.

Jade is the CEO of X8 media, an influencer marketing agency that works with tech platforms and civic movements. She also founded an incubator program, CRE8, an organization that helps Gen Z creators build long-term businesses through blockchain and cryptocurrency. She started the millennial entrepreneurship podcast The Raisn Brand in 2017 and received the Creator on The Rise feature on YouTube Trending Worldwide. With over 750k+ fans and followers, her brand focuses on motivation and helping viewers grow their social media presence. Her content exceeds 20 Million views on YouTube, TikTok, and Instagram.

In proper TC fashion, we opened the conversation by breaking the ice. In a series of rapid-fire questions, Jade shared that her favorite emoji is the skull. Her favorite things to talk about are crypto, bitcoin, blockchain, and TikTok memes. She also said that if she could change one thing about the world, she would want to see more people working toward equality.

She also offered insight into her echo chambers, which she describes as influencers with perfect physiques and entrepreneurs who subscribe to hustle culture. “I just don't look like those girls all the time,” she said about the former. “I would go to follow all these brands like Brandy Melville, and I just didn't like, necessarily fit in their clothes, like the same way my friends did.”

As an entrepreneur, Jade values doing work that impacts the people around her, especially over the past year. Her team is primarily women of color, and many of them shared stories of the racism they faced. “I feel like with my platform, it just didn't feel right to talk about marketing when the world was on fire,” she said. “I realized, ‘how can I do what I love to do, which is marketing and telling stories, but pivot to something that I feel like is important to say?’”

Ahead of the election in November, Jade educated herself about the Black community and wanted to use her platform to encourage Gen Z to vote. She partnered with a grassroots organization called The 99 Problems to build a TikTok house to educate Gen Z to vote. The collective amassed over 27 million followers. “My agency did work with these creators to make amazing, impactful content about educating people to vote,” she said. “I think that it's just so important for me just to keep doing those civic movements.”

She also shared a story about experience backlash for posting a video supporting the #StopAsianHate movement, which brings awareness to murders and hate crimes within the Asian community. While she received support from some audiences, she also received backlash from people who felt she should be focusing on other causes. “It is by nature super hard to be bold on something hard to speak about and don't receive criticism,” she said. “It's a part of what it means to be an advocate.

Jade thinks brands should make an effort. to speak out about injustices in the world, and X8 media is all about partnering with brands that do so, in a way that feels authentic and not a simple PR move. “It's not really about trying just to change the narrative,” she said. “It's just about amplifying the voices that need to be heard and also working with the brands that already want to make a change, versus forcing them just to be trendy or cool. I think that there's this real need for people to have different perspectives in conversation.”

When it comes to navigating cancel culture, Jade said there’s a difference between canceling someone and giving feedback. If her community asks her to change something or offers advice about her to make her brand better. She adds that it’s important to separate criticism of your brand from criticism of yourself. “If you can't separate that, it can feel very vile, and it does feel like you're canceled,” she said. “So I think the difference between cancellation and feedback is based on how you interpret and how deep you take it.”

Here at TC, we have a whole room in our community dedicated to Hot Takes, where members can share a controversial thought, question, or icebreaker about something they believe. This week’s hot take was brought to us by TC community member Abigail Leyden, who said Dunkin was better than Starbucks.

While Jade acknowledged Dunkin’s high-quality matcha, she said Starbucks is her personal favorite, mostly for their consistency.

She’ll have to take it up with Abigail in Geneva.

Jade said she is the definition of the imperfect, and she doesn’t always say the right things. Sometimes, she feels like her words or experiences, especially around her experience with discrimination, weren’t going to be enough to make an impact. Still, she’s learned that sharing her story and speaking up for what matters has value. “I think there should be more normalization on the imperfect advocate,” she said. “It's okay not to say everything right. Maybe you don't get all your facts straight, but then you research right after because someone told you, and that’s okay. At least get started. Don't let it stop you. That's how I felt yesterday.”

She also offered some important advice for dealing with imposter syndrome, especially in digital spaces, where so many people have access to your platform. She said that it’s essential to look at the bigger picture and remember that not knowing everything is normal. If someone feels the need to make a negative comment, it has everything to do with them and not you. “No one knows what they're doing,” she said. “We don't even know what's beyond us. So if you're feeling imposter syndrome, instead of relying on what you know, just understand,  no one knows everything.”

Jade has two upcoming projects she’s passionate about. One involves brand partnerships, and she invited anyone who wants to learn more or apply for an internship opportunity to follow her on social media.

She’s also speaking at a few conferences in some blockchain conferences, which she’ll also hype on social media. “I don't know where I'm going to exactly be in a year from now,” she said. “I was even thinking about moving somewhere soon, but I don't know yet. The longest my brain goes is a four-week horizon. I have my five-year goals, but I'm not one of those people that's going to have my 10-year vision.”

Big snaps to Jade for sharing her wisdom with us today. We’re so grateful that she’s in our world. Keep up with her on Instagram to learn more about her work.