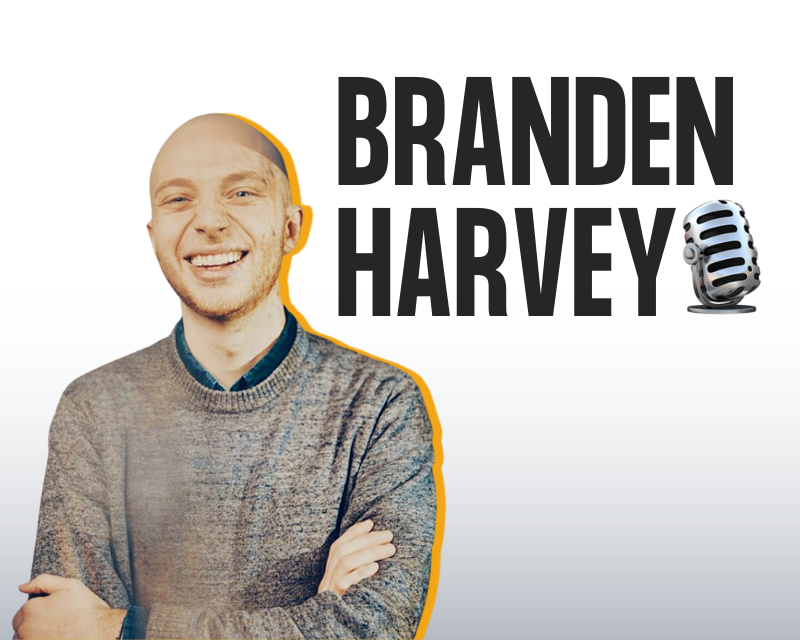 When journalist and photographer Branden Harvey moved to Portland, Oregon, he started witnessing many of the problems facing the city. He lived downtown and was consistently confronted with people experiencing homelessness every day. “It really started to open my eyes that maybe I had been living with a great deal of privilege and not recognizing the problems that so many people were facing,” he said.

Branden was hired at various nonprofits, who were working to solve the world’s problems, to take photos. Through his work, he was exposed to the messy, gritty nature of the city. “You can't just smile your way through it,” he said. “So you can't just be optimistic and hope things will work out because the systems are in place to continue the cycle unless somebody steps in and makes a difference.”

This week, we sat down with Branden on the latest episode of The Conversationalist Podcast, a social entrepreneur, speaker, and journalist who focuses on the good happening in the world. Branden shares his message of hope in the face of darkness and how his work seeks to mobilize his audience to create change. He also offers advice for navigating difficult news and the importance of validating other people’s experiences when we converse about it.

Branden is a GOOD friend of The Conversationalist and was featured as the 2020 Conversationa-LIST Celebrity Honoree for Journalism. He is a Portland-based storyteller who amplifies good news on the Goodnewspaper and the Sounds Good podcast with his company Good Good Good. He also unifies positive changemakers through an online community of more than two hundred and fifty thousand world changers. He's helped brands like Disney, Square, Southwest Airlines, and (RED) tell meaningful stories and has been featured in outlets such as The New York Times, Mashable, and more.

In proper TC fashion, we opened the conversation by breaking the ice. In a series of rapid-fire questions, Branden shared that his favorite emoji is the little yellow heart and if he could change one thing about the world, he would want to make people less cynical and more hopeful.

His go-to karaoke song is anything by Miley Cyrus.

He’s also working to break open his echo chamber online and make his feed more diverse. Currently, he said he skews toward following people who are activists and are generally bold and communicative. “It's something I'm constantly asking myself,” he said. “How do I continue to diversify, who I'm listening to, and who I'm learning from?”

Since he was young, Branden has identified with positivity and optimism. Over the last few years of his journey, he’s been moving from positivity to hopefulness, stemming from agency and responsibility. “I have been moving from this sense of positivity or optimism to a sense of hopefulness of working things out as I work at them, this focus on responsibility and agency,” he said. “That has been the transition that I've been trying to figure out.”

A few years after moving to Portland, Branden launched The Sounds Good Podcast without a specific goal in mind. He simply wanted to talk to people he admired who were making a difference in the world while maintaining a positive mindset.

“I just kept on asking again and again, and again. ‘How are you so hopeful in the midst of so much heartbreak in the world?’ ‘How are you so hopeful in the midst of the heartbreak and pain and injustice?’” he said. “Conversation after conversation, especially in that first year and a half of the show, people were just diving into this idea of how you can find hope within the heartbreak. You can find purpose within the pain and the people who have made the biggest difference are confronted with a pain so great that they had to choose to make sure that nobody else had to experience that again.”

From there, Good, Good, Good was born. “Everybody has had something that's broken their heart in the news, in their personal life, in their community,” Branden said. “What if we had a community that focused on celebrating that good and becoming the good that we wish to see in the world?”

Branden said that in his dream world, we would have people who don’t ignore heartbreak, pain, and injustice but are hopeful and create the change they want to see in the world. “We would have an incredible world filled with people who are hopeful action takers,” he said.

Here at TC, we have a whole room in our community dedicated to Hot Takes, where members can share a controversial thought, question, or icebreaker about something they believe. This week’s hot take was brought to us by a TC community member and Advisory board member Seamus Bozeman. He wanted to know if Branden thought cereal was a soup or a salad.

Braden said he classifies it as a salad because he just puts a little bit of oat milk on top of it. “Maybe the question needs to be in the context of cereal,” Branden said. “‘Is Branden's oat milk salad dressing or a soup?’ And I think it would be a salad dressing.”

Seamus argues that it actually is soup and Sophie said she agreed with him because she pours more oat milk.

Branden shared three steps to take when he feels overwhelmed by bad news. He suggested that when you encounter bad news, try and acknowledge how it makes you feel. “I try to mourn this moment,” he said. “I try to mourn the heartbreak and pain and injustice that people are experiencing. And what that allows me to do is that actually allows me to feel a deeper sense of empathy.”

Secondly, he suggests, in the words of Mr. Rogers, to look for the helpers. “In all of our time at Good Good Good covering bad news, and good news, we have never not found a helper,” he said. “The great thing is once you find that helper, you feel a little bit more hopeful. You recognize all is not lost and you get to ride the momentum of that feeling to the third and final step, which is to take action.”

Branden said that taking action can remind us of our power, no matter how small the steps we take might feel. “Maybe you don't have the ability to become a regular volunteer, but you can say, ‘Hey, do you need any help with X, Y, or Z?’ and you can volunteer one time,” he said. “Or maybe it's as simple as helping more people understand this problem and the solution and letting people feel that sense of hopefulness skipping to that next step of looking for the helpers, sharing those stories of the helpers will allow more people to get involved and take action.”

He also reminded young people who are experiencing bad news to know they aren’t alone and that there are others who can resonate with how they feel.

“My hope is that you're going to have people who show up in your life and help you,” he said. “If not, then you have the opportunity to be that for somebody else. I'm sorry that you just experienced bad news. Your feelings are real, they're valid. They won't last forever and better is coming.”

Branden said there are a few ways to get involved with Good Good Good. He invited everyone to listen to the Sounds Good podcast, where he dives into good news stories and offers ways his listeners can take action. He added that listeners can follow Good Good Good on Instagram to incorporate more good news into their feed.

Finally, Good Good Good hosts a membership program where users can get a print newspaper with good news sent straight to their doorstep. “It is so funny to get a print newspaper in the year 2021, but genuinely it stops you in your tracks,” he said. “It helps you feel so hopeful, it helps you do more good, and you can access our incredible community of do-gooders, which is really, really fun. But mostly, we just want to help you feel more hopeful, do more good.”

Big snaps to Branden for sharing his wisdom with us today. We’re so grateful that he’s in our world. Keep up with him on Instagram and follow Good Good Good to learn more about his work.