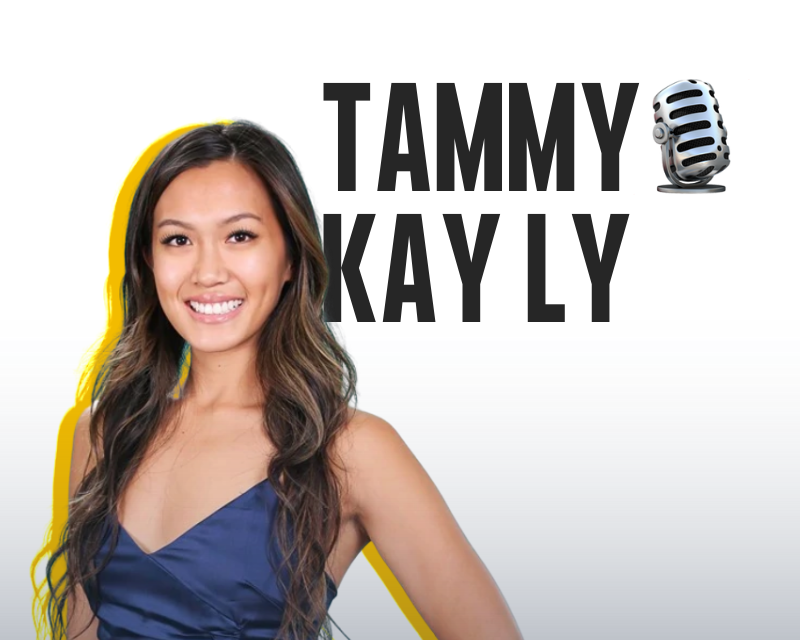 When Tammy Kay Ly appeared on season 24 of The Bachelor, she dealt with an influx of hate on social media. This intersected with her experience as an Asian American woman navigating a ‘Caucasian dominant world’ on television.

While Tammy said she’s grateful for her experience as a contestant, and the support she’s received in the aftermath, she acknowledged that the backlash she received was overwhelming.  “I would say I'm a very strong person,” Tammy said. “I can handle a lot of things, but the volume that it came at right after the show was something I don't think I would wish on my worst enemy.”

Tammy recalled that when the first episodes of her season aired, she felt like she finally had a platform to share her voice. But soon, a switch flipped, and the public opinion around her changed. “People who take their time to create fake profiles and wish death threats upon you and leave you voicemails, I feel sorry for them because they have nothing else,” she said. “It's just background noise at this point, but I will say it does hit me sometimes.”

This week, we sat down with Tammy on the latest episode of The Conversationalist Podcast. She shares her experience as an Asian American both on and off camera and offers insight on moving beyond the boxes society places us in. She also talks about becoming a better ally and navigating noise and hatred on social media. ‍

Tammy is a New York-based multi-hyphenate, TV personality, and real estate investor. She uses her platform to share lifestyle and career content, talk about breaking glass ceilings for minorities, women, and millennials, and connect with her followers worldwide.

‍‍In proper TC fashion, we opened the conversation by breaking the ice. In a series of rapid-fire questions from Sophie, Tammy shared that a sandwich is not a hot dog, she can’t live without sour gummy worms, and “Money” by Cardi B is her walkup song.

She shared that she’s a hardworking and passionate person, who loves deeply. “I hate saying this because it makes me feel like the movie Shrek, but there's a lot of layers to me, like an onion,” she said. “I feel like not just one or two things because just as soon as you think that, you know me there's another layer that goes into it.”

She also offered some insight into her echo chamber, on social media, and in real life. “I feel like I try to surround myself with not only dreamers, but doers of the world and hardworking people,” she said. “I think that drives and motivates me. I think that's a big part of my work ethic as I surround people who have very similar passions in life.”

Tammy spoke about her experience appearing on The Bachelor and how she wasn’t prepared for how negative comments would impact her mental health. During and after the show’s airing, she received phone calls, voicemails, and DMs attacking her on-screen actions. “I get how passionate the fans are, and I'm grateful for that, but they also have to understand that we are humans as well, and we're not all perfect,” she said. “There are going to be times where we have ugly moments. Mine just happened to be on television, but it doesn't define who I am.”

She hopes that fans will be open to seeing her take on other projects in the future. “I'm the type of person where I'm going to let myself hurt, have my moment, and then I'm gonna take it,” she said. “I’m going to use it as fuel to fire up my biggest passions in life. So that’s the bigger picture here. So it was rough, but all good.”

She also hopes to have more have opportunities to tell her story so that people can see her outside of the box the show’s narrative placed her in, especially in light of the #StopAsianHate movement. She thinks that many people can relate to her, as someone who tends to be the loudest in the room. “I think the edit that I got checked off a box of ‘Asian people are supposed to be sweet and meek and mild and this person isn't, so she's a terrible person,’” Tammy said. “But that's not it, you know?”

When it comes to starting conversations about Asian hate, Tammy starts with her inner circles and encourages people to stand against harmful jokes and microaggressions. She said she’s gotten backlash on social media for not publicly commenting on the movement, but as someone with lived experiences being bullied for her race, she’s taking the time to process it.

Most of all, Tammy hopes that the Asian community can be heard and acknowledged. “I felt so unheard,” she said. “I feel like being an Asian-American and then finally having this vulnerability on us now, people are thinking of it as less. People will comment on my stuff and say, ‘Stop saying that you're a person of color. You’re just Asian.’ Is Asian not good enough to be trendy too?”

Tammy hopes the Bachelor franchise puts their money where their mouth is and makes a permanent change in representation, diversity, equity, and inclusion. However, she added that fans also have to be part of the solution by supporting cast members of color. She pointed out that the white finalists quickly hit over half a million followers in past seasons but the finalists of color in Matt James’s season barely hit 200k. “So you can say and yell and fight that we want diversity, but when you're not supporting people of color, what are they going to do?” she said.
‍

Here at TC, we have a whole room in our community dedicated to Hot Takes, where members can share a controversial thought, question, or icebreaker about something they believe. Today’s hot take was brought to us by community member Joshua Jones who thinks that Netflix is the superior streaming service.

Tammy agreed that Netflix is the best, mainly because there are no ads. She recently watched iCarly and Ginny and Georgia which she told Sophie is a must-watch. Her all-time favorite Netflix watch is Imposters, which she resonates with as someone with a background in sales.
‍

‍Tammy reminded Gen Z’ers not to get caught up on social media. “It's a highlight reel of people's lives, and people don't live in a highlight their entire life,” she said.

She also emphasized the importance of living in the moment, being present with the people, and being kind on social media. “Please treat it like someone's home,” she said. “You go into someone's home, and you treat them with respect.”

She also offered some advice for prioritizing mental health and taking time to exist offline. “When I'm with my friends, I will put my phone face down,” she said. “I work a lot all the time, so I always am on my phone answering phone calls. You'll be surprised at how often you do check your phone when you're around good people. It's very rare that you would because you just love the company, right?”

Finally, drawing from her experience, she offered some tips for approaching difficult conversations. She said it starts with an open mind and trying to understand the other person’s perspective. “My best friend is a Republican and hearing some takes that she has, opened my mind,” Tammy said. “I used to be close-minded like ‘Republican people are bad,’ and they're not bad people. We just all have different thoughts about different things. When you do that, you put people in a box. Be open to listening and be open to sharing because both are required for a real conversation.”‍

Tammy shared that she’s working on many projects that she can’t talk about yet. But, she said thank you to those who support her. “It means the whole world,” she said. “When I set a goal, I will do that goal until it is done. So one day, I will meet every single one of you, and I will give you a big hug post-COVID.”

In the meantime, keep up with Tammy on Instagram, Clubhouse, and TikTok, and follow tammykayrealty to learn more about her real estate career.

Snaps to Tammy for sharing her wisdom with us today! We couldn’t be more grateful to have her in our world.