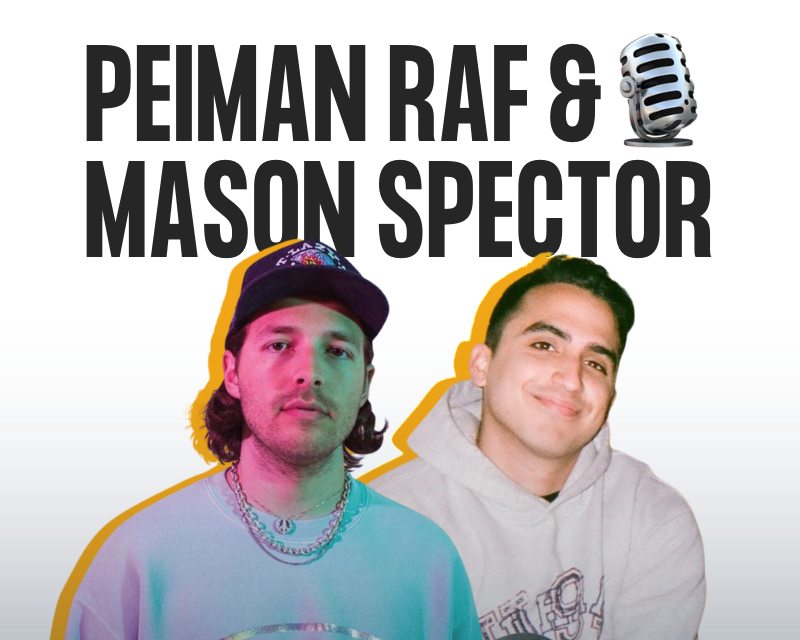 Peiman Raf and Mason Spector, two of the co-founders of lifestyle clothing brand Madhappy, are building an empire centered on mental health awareness and creating a more optimistic world.

The pair initially met in high school through Mason’s brother. They were inspired to create a brand that would capture real-life experiences. “I think a reason why our brand has been able to grow so quickly is because of that name,” Mason said. “People can attach to it, and it can take on a meaning of its own for so many people. We all can relate to it in our special way, which makes it so powerful and totally transcending.”

For Peiman, Madhappy is about trying to be optimistic despite the ups and downs of life. As the business grew, tying in mental health was inevitable. “It was ingrained in the name from day one,” he said. “So as we started to grow our mission to create more conversation around mental health, I think it was just like a very natural progression that we were able to [convey] what the core message was from day one.”

This week, we sat down with Peiman Raf and Mason Spector on the latest episode of The Conversationalist Podcast. They are the co-founders of Madhappy, an optimistic lifestyle and clothing brand focused on positivity and mental health.

Peiman was born to Iranian immigrants in Italy and moved to America at a young age. Before launching Madhappy in 2017, where he is now the CEO, Peiman worked as an investment banker in New York for several months after graduating college.

Mason has dedicated his career to bringing awareness to mental health and initiating conversations on various platforms. After struggling with addiction in his youth, Mason is now over two years sober and an advocate in the addiction recovery community. He is also a certified life coach, a member of the Forbes 30 Under 30 Class of 2020, and a proud college dropout.

In proper TC fashion, we opened the conversation by breaking the ice. In a series of rapid-fire questions, Peiman and Mason shared that they are currently located in downtown Los Angeles. Peiman’s walkup song is "Trophies'' by Drake, and Mason’s is  "Final Countdown.” Mason’s bucket list includes skydiving, and Peiman said becoming a father is at the top of his list.

If he could change one thing about the world, Peiman would want to see more compassion. “I feel like a lot of people start to feel like life is somewhat of a competition,” he said. “I think we all exist on this planet together and are linked together in some weird ways that we don't all understand. If we did a better job of living like that and working together and treating other people how we'd like to be treated and just some basic things like that, that's a world that I'd love to live in, and a world that would survive a lot longer than ours will.”

Mason said he would want to see more optimism. “I think that that would go a long way even in how we approached our every day,” he said. “That doesn't mean that there won't be challenges, but I think the way of thinking is so important, and we've seen the best way to make it through all the ups and downs of life.”

Finally, Peiman and Mason offered some insight into their echo chambers. Peiman described being in an entrepreneurial echo chamber that includes other founders and people working in the startup space.

Mason said he mainly uses Twitter, where he can explore different interests and pieces of himself, such as sports, music, and fashion. However, he also echoed Peiman’s point and said he finds himself in the founder echo chambertoo. “You often find yourself kind of with the blinders on and tunnel vision,” he said.
‍

Peiman and Mason shared their company’s personal and professional story and how they've built Madhappy into a massive success. They also explained how through leading with kindness, building strong support systems, and leaning into hard conversations about mental health, we can create a more optimistic world.

Mason and Peiman shared their own mental health journeys and how it intersects with their company. Even though they promote positivity, they want people to know that everyone has bad days too. “I went through the hardest time in my life and my rock bottom was when things were going well for us, and things were starting to take off,” Mason said. “I think that's been an important lesson for me too, that we see with a lot of successful people. Success and money and status and all these kinds of things don't equate to happiness. But just in the last few years, with people like Kate Spade or Anthony Bourdain or people who seemed like they were on the top of the world and had nothing to complain about. It reminds me that mental health does not discriminate. It's a part of all of our lives.”

Peiman said he first became aware of the importance of his mental health before they started the company. He now attends therapy regularly and is grateful to have a strong support system, even if he didn’t always feel comfortable talking about his feelings. He wants their platform, The Local Optimist, a mental health resource under Madhappy, to help people take the first step to talking about their mental health through its recently launched non-crisis support line.

Mason said he has attended therapy since he was seven, so expressing his feelings is part of how he approaches life. “I think the big focus there with The Local Optimist and the hotline especially is meeting people where they are,” he said. “We don't have all the answers, and we can't walk this walk for you, but if we can just meet you wherever you are and provide you with some conversation to get you just to take that first step, then we're going to stay there with you, your whole journey, walking you foot by foot.”

Finally, they offered some advice about building a more optimistic world. “There's so much in life that we don't have control over that people tend to focus on that causes a lot of our stressors and anxieties and things that don't make us feel so good,” Mason said. “One thing we do have control over that we should focus on is our mindset and our outlook and how we choose to wake up and approach every single day.”

Here at TC, we have a whole room in our community dedicated to Hot Takes, where members can share a controversial thought, question, or icebreaker about something they believe. This week’s Hot Take was brought to us by Alexandra Cohen, who wanted to know if Peiman and Mason thought an Uncrustable is a sandwich or a ravioli-- a classic TC Hot Take.

Mason shared that he has a severe peanut allergy, so he’s never had an Uncrustable. “I don't feel like I can fully comment on it, having never tasted one,” he said. “But my gut is telling me that it's more of a ravioli.”

Peiman said it’s not exactly a ravioli but more of a hot pocket.

Sophie said she would probably classify it as a pie. “If you define a pie as something that has something on the outside with something enclosed with those little marks around the outside, it could be considered a pie,” she said and added that anyone with an opinion on this should join the conversation in Geneva.‍

When it comes to starting conversations about mental health, Mason said Gen Z’ers should begin with identifying what they need. From there, he suggested finding a support system, whether that be a parent, friend, or teacher, and opening up to them. “Go to your rock and ask for help and let them help you and take care of you,” he said. “We all have so many people in our lives who love us and care for us. It's hard to always feel that sometimes, but it's so important to have a support system that you can rely on.”

Looking back on his journey, Peiman wants the next generation to know they shouldn't be afraid to take risks when starting a project or venture. “Even if it fails, the amount that you will learn and the amount that you'll grow and learn about yourself will be far greater than almost any other job,” he said.

“I would tell my younger self probably that you're a smart kid,” Mason added. “Stop being so hard on yourself, and you're enough too.”
‍

Just a few weeks ago, Madhappy released a mental health journal, its first mental health-specific product. It already sold out. “We hope products like that can continue coming, and people can continue to engage with them and benefit from them,” Peiman said.

Additionally, the duo will launch The Madhappy Podcast on Thursday, May 20th. “Mason and I will be interviewing a bunch of cool people, talking about their mental health journeys, experiences, our lives, and it should be really fun,” Peiman said.

Snaps to Peiman and Mason for sharing their wisdom with us today! We couldn’t be more grateful to have them in our world. Keep up with MadHappy and The Local Optimist to learn more about their impact.