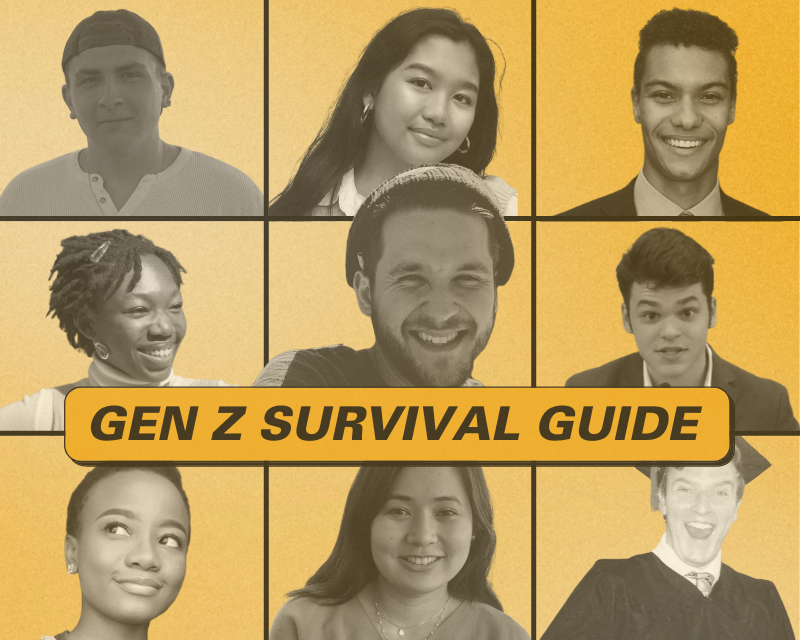 This year, over 4 million Gen Zers cast their vote in the election. But after going out to vote, the discourse and energy around building a better future kept on. While Gen Z might have impacted as a diverse voting bloc with steadfast activists, the issues they face as a generation extend beyond politics.

On November 10, The Conversationalist Founder and CEO Sophie Beren spoke with Devon Werkheiser and a group of Gen-Z panelists about what it means to survive in the world as a member of Gen Z. The panelists offered their takes on how to come together as a generation and build a better future.

Our host, Werkheiser, is best known for his lead role as Ned Bigby on Nickelodeon’s

Ned's Declassified School Survival Guide. Given the show’s themes, there was no better host to help Gen Z navigate their present and future. Following the panel, live audience members could participate in an exclusive virtual Q&A session with Devon.

“What you're going through might be confusing, and you might feel alone in it, but you're not,” he said at the top of the panel. “We're all going through it, and we're all trying to get through it together, and here are some ways we can get through it better. That was the heart of our show. I’m excited to talk to all you Gen Z’ers about where we're at as a country [and] as a generation.”

What do you think defines Gen Z?

Peter Tanner Jr., a student at Florida Atlantic University, said that Gen Z is resourceful, diverse, and determined. “We're capable of doing anything we've set our mind to,” he said.

“Being open-minded, whether it's being open to growth or just being open to caring about social issues or other people, that kind of leads to being inclusive,” said Amanda Eric. She is currently a senior at the Caesar Rodney School, where she co-founded the Black Student Union.

When you heard the title of this panel, what important life survival skills came to mind?

Tobey Lee, a history major at Cal Poly San Luis Obispo, said he instantly thought of empathy. “I think that empathy is all about hearing someone, recognizing someone, and loving them for who they are,” he said.

16-year-old Sophia Delrosario is the founder of Zenerations, a youth-led organization that empowers creatives and activists through literature, education, politics, and artistic pieces. She sees a duality among Gen Z, wherein its members are individualistic but also united. “We like to put labels on ourselves based on our aesthetics, or you know, visually appealing stuff,” she said. “I think that's just so important because at the same time, we're united through the movements that we create and protests and [in] fighting for social change.” She also added that social media fluency is a MUST for Gen Z, which she said allows for more empathy.

What do you wish you would have known sooner in thinking about preparing for the future?

“The biggest thing I realized was there's no barrier to entry,” said Jesse Kay, a 20-year-old entrepreneur, and CEO of Vyber Media. “You're sort of fed your entire life that you need to go to high school, and then to college, and then get an internship, and then your first job. Maybe if you do well in your first job, you have the authority to get a better job. I think what I’ve realized from being with an amazing group of friends and people that pushed me to start when I was younger was there's no barrier, and your youth is an advantage.”

“You can always choose to take ownership over your life and what you're creating,” Werkheiser said in response.

Eboseremen Ailenotor, a 22-year-old Adulting Coach, said that the first basic life skill is confidence. “People will look for a reason to discredit your experiences,” she said. “If there is anything I’ve understood about our generation, it is that the rules that apply to our parents don't seem to apply to us. We seem to do things differently.” She added that another critical life skill is the ability to relate to people who differ in opinions.

Valerie Gregorio is a recent college grad who is currently working a full-time job in her field. She said her college experience left her somewhat prepared, but she wishes she had gotten more advice about preparing for life after college. “You do not need to be afraid to reach out to people,” she said. “You’re not going to have your life figured out.”

Ransom Fox is a sophomore at George Mason University. He is a Student Government Senator, where he heads the Patriotic Protection Program. He said that becoming an adult doesn’t have a textbook definition and doesn’t always look a certain way. “When people talk about Gen Z, they aren’t just the future. We’re the present. We’re here, we’re loud, and we’re trying to make positive change.”

What do you hope to see Gen Z accomplish moving forward, and how can they make this happen?

Valerie hopes to see Gen Z accomplish actual progressive change. She noted that she hopes to see the momentum continue from the election.

Peter emphasized the importance of being willing to break traditions, both in individual expression and the fight for progress.

Eric brought up that Gen Z could accomplish its goals through healthy dialogue. “Ransom said that we were a very loud and proud generation,” she added. “I think that sometimes that could hurt us when it comes to conversations. Having healthy dialogues where we can reflect and see what's happening in ourselves and then, from that, reflecting and seeing what's happening in the world because we can't go out into the world and try to fix every single problem if we haven't fixed things within ourselves.”

“You can’t only take care of the collective problems and not worry about yourself, your room, your house,” Devon said in response to Eric’s point.

How can we prepare Gen Z for what lies ahead?

Sophia noted the importance of bridging the generational gap. “I think that we should start looking to our role models and try to become even better versions of them and follow in their footsteps,” she said. “As much as Generation Z has made progressive change, we owe so much of it to the generations before us and to the people that have started these movements.”

Jesse emphasized the importance of putting Gen Z in leadership positions. His organization started a Gen Z-led non-profit, Makin’ Lemonade Fund, that raised $150,000 in 40 days for Covid-19, an undertaking that he attributes to his generation’s ability.

As a history major, Tobey said he’s felt empowered by the election cycle. He added that he educates himself with many life lessons about taking on the world from music and film. “I’m only 19, and it’s hard for me to love myself quietly yet,” he said. “I’ve gone through a lot, and high school is, and college is tough.”

“Regardless of how strongly you feel about your values or how strongly you feel about your opinion, there's always going to be that person that doesn't just agree with you,” Eboseremen said. “We have to accept people as they are because if you love yourself and you've accepted yourself, why is it so hard to accept that this other person has values that are just different from yours?”

How do social media and technology play into the challenges Gen Z faces?

Ransom pointed out that Gen Z is like guinea pigs on social media, as the first generation to grow up with it. He believes that social media harms Gen Z and is preventing unification. “I find that social media is driving our generation apart,” he said. “Tribalism is ripping the fabric of our nation apart. That's why we need a political and social revolution- one where we don't leave bridges.”

Before the panelists went on their way, Devon dropped some of his survival tips for navigating the ups and downs of life:

“Take the hit, dust yourself off. Bleed a little bit. Put a band-aid on and then take ownership for that new moment you find yourself in,” Devon said. “Go, ‘all right, what is my best course of action now? How do I make the world better for me and those around me?’ That's the lesson adulting has taught me over and over again because, in your 20s, you're going to fail. You're going to fail a lot [and] you're going to face a million challenges. You're going to want to start a million things, and it's all going to go wrong a million times. It's perfect because it's going to be guiding you exactly where you need to go.”

Join The Conversationalist for plenty more panels in the weeks ahead, featuring important conversations about topics that impact Gen-Zers. Follow The Conversationalist on Twitter,   Instagram, and TikTok to learn about how you can enter to be featured on a future panel and text UNIFY to 1 (877) 222-1119 to join our community and connect with members.