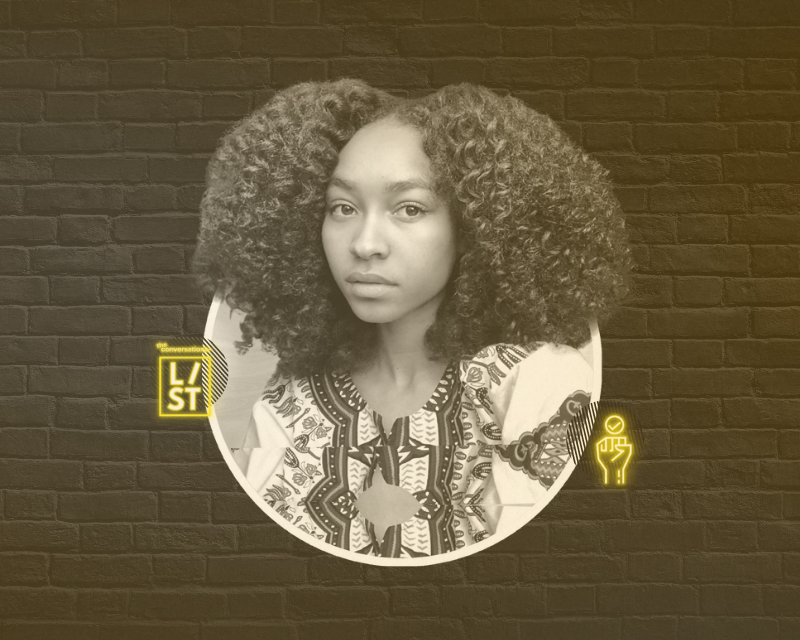 Anya Dillard is using her voice to fight for change

17-year-old Anya Dillard’s journey as a changemaker began with philanthropy. When she was just five years old, she started an annual holiday gift-giving charity at the hospital where her mom works in Brooklyn, NY. “Growing up, I had never been exposed to many children with disabilities,” she recalls. “After visiting the hospital for the first time and meeting some of the young patients who lived there, I wondered why there weren’t more disabled children in the shows I watched on TV or the posters of kids around my school. I became determined to make them feel seen.”

"I wondered why there weren’t more disabled children in the shows I watched on TV or the posters of kids around my school."

From that point, Anya continued to raise money for the causes that mattered to her. Soon enough, she learned to leverage her voice toward politics. After graduating from a STEM program for the gifted, Anya was invited to the 2016 Presidential Inauguration with other members of her graduating class. “I was the only one who didn’t jump at the opportunity to attend,” she recalled. “At the time, political tensions were high, and our country was severely divided. I felt neither side of our democracy represented me, my community, or the true essence of the nation. Marginalized communities were being forced to choose between the lesser of two evils. I didn’t feel right glorifying that fact and decided to decline the invitation.”

Anya ended up being the only member of her class to decline. The significance of that moment marked the beginning of her journey to find her voice. “It was what taught me that there is strength in having an opinion and power in one's presence,” she said.

After 8th grade, Anya was accepted into the BLACK GIRLS ROCK (BLACK GIRLS LEAD) Academy created by DJ Beverly Bond in partnership with BET, which catapulted her into the world of advocacy and social entrepreneurship. “Being exposed to such an amazing community of black creatives, entrepreneurs, politicians, entertainers, and leaders from all over the country solidified my realization that, “This is what I want to do!” and that was when my journey as an activist began,” she recalled.

Anya is the Founder of The Next Gen Come Up, a non-profit organization dedicated to encouraging youth to pursue activism, explore community service, and express their creativity. She is also the 3rd black female Student Council President at West Orange High School and the head of the first-ever all-brown and all-female student council cabinet in West Orange High history. Additionally, she organized the most significant civil rights demonstration in her town’s history and delivered a speech viewed by over 22,000 on social media. Her activism has been featured in Elle, Seventeen, and Glamour Magazine. “Looking back at our history shows me just how much progress we’ve made as a people, while current events put into perspective just how much work is still needed,” she said. “I am also passionate about activism because I have an 8-year-old brother, and knowing that I can greatly impact the society he is growing up in inspires me to be brave, to be progressive-minded, and to be an innovator.”

As an exceptional Gen Z’er making her mark on the world, she was honored for her work in the Human Rights space through The ConversationaLIST.  “I use my voice for good by motivating, mobilizing, educating, and creating,” she said. “I've always strived to motivate others who are finding their voices, mobilize people to strike change in my community, teach youth to disrupt narratives and become leaders, and create polarizing media content that pushes empowering narratives of marginalized groups to the forefront.”

“Ask questions, start a conversation, or respectfully contribute to the ones you witness."

Anya wants to advise anyone struggling to find their voice to take the leap and not be afraid to share their opinion. “Be courageous,” she said. “Ask questions, start a conversation, or respectfully contribute to the ones you witness. Becoming comfortable sharing your opinion is a huge stepping stone towards finding your voice, so start with your friends and family. Then move onto asking more questions in your social studies class, asking your peer's opinions on social issues, or even joining a debate or unity club at your school.”

As a senior in high school, Anya is preparing for college, where she hopes to earn a bachelor’s degree in Mass Communications & Media Studies. Afterward, she plans to run a production company, write for major television networks, and continue her philanthropy work.  “I am passionate about what I do because my ultimate goal in life is to create: create art, create change, and create safe spaces for the people that our society tries so hard to silence,” she said. “History and current events drive me.”

Anya believes that change can’t begin until we start having conversations and become willing to ask tough questions. “Society won’t grow or progress until we have become open enough to have controversial conversations,” she said. “The Conversationalist creates a hub of openness and positivity for young people to not only share their opinions but learn from others and gain an understanding of what makes people from all walks of life think the way that they do.”

“Society won’t grow or progress until we have become open enough to have controversial conversations.”

For Anya, a unified world is a world where all people are not just accepted but uplifted and encouraged to reach their highest potential. “To me, a unified world honors all forms of empathy and values the contents of one's character over their beliefs or the color of their skin,” she said.

She hopes to see Gen Z build a unified world by learning how to not only have strong opinions but receive and learn from opinions that may differ from their own. “As a generation, I find that we often feel the need to defend ourselves when we come in contact with people who have opposing beliefs to topics that we are passionate about,” she said. “What we don’t realize is that being able to take in and listen to someone else’s perspective plays a huge part in us understanding each other as people, and learning how to interpret the bigger pictures that make up the murals of the ever-changing social and political climate of our society.”

Anya reads articles from conservative news outlets about events that she read about previously from more liberal news outlets to break open her echo chamber. She also watches discussion series like Jubilee's "Spectrum" and "Middle Ground" because they strike up dialogues between her peers. “This often helps me to gain a better understanding of issues in their entirety and to pinpoint any preconceived notions I may have about certain perspectives before watching,” she explained.

Anya approaches conversations with people who disagree with her as learning lessons. “You can always learn something from someone else's thought process, even when their gears turn differently than yours,” she said.

The Conversationalist couldn’t be more grateful for Anya Dillard for all she does to promote activism and education. Keep up with her on Instagram and follow The Next Gen Come Up to learn more about her work.

Come hang out with Anya and all of our LIST honorees! Join us in Geneva and follow The Conversationalist on Twitter, Instagram, and TikTok to stay up to date with all of our future events.