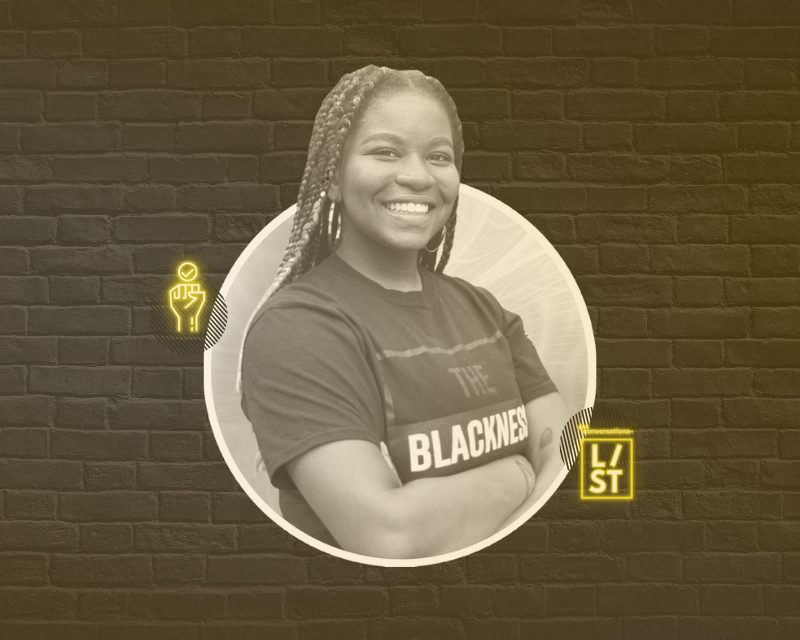 Peyton Wilson is using her voice to advocate for Black liberation

Speaking out against oppressive systems

When 20-year-old Peyton Wilson was a sophomore in high school, she was disturbed by the school’s decision to fire its first Black woman principal after she sought to make changes to the school climate. “Despite improved test scores, fewer detentions and suspensions, and improved attendance at my low-income and minority school, her stance against the divisive traditions in our community got her fired,” Peyton explained.

In response, Peyton organized with a group of Black students and protested at school board meetings. Their actions garnered media attention, but the school did not reinstate the principal. “Since then, I've never stopped speaking out against oppressive systems like those I witnessed that year,” she said.

“I was tired of being terrified that when my dad left for a work trip, he wouldn't come back.”

Following the murders of Philando Castille and Alton Sterling, Peyton said she reached a breaking point. “I was tired of being terrified that when my dad left for a work trip, he wouldn't come back,” she said. “Or that my friends and I couldn't hang out at the park [as] normal teenagers could without being approached by police or avoided by families.”

It was at a Black Lives Matter protest in July of 2016 when she realized she couldn't just accept this as reality. “I wasn't living,” she recalls. “I was surviving, and that's not a life I was willing to accept for myself or my people.”

Now, Peyton is a writer and activist using her talents and her platform to generate essential conversations surrounding Black liberation and civil rights. She is the founder of The Black Knowledge Coalition, an initiative dedicated to increasing access to information only available in higher education.

As an exceptional Gen Z’er using her voice for good, she was honored for her work in the Human Rights space through The ConversationaLIST. “I wanted to empower my peers to advocate for themselves and the future we were inheriting because it affects us more than we know,” she said. “I continued activism in college because I didn't see myself reflected in mainstream activism, even though me and my people were the most directly affected.”

"I didn't see myself reflected in mainstream activism, even though me and my people were the most directly affected.”

Listening to others is at the core of Peyton’s work. She believes it’s impossible to be an effective activist if you don’t know when to pass the mic to someone else. She wants young people who are seeking to find their voice to know they already have it. “Any student can speak out,” she said. “The real question is not how can I find my voice, but when will you finally say ‘enough is enough.’”

Five years from now, Peyton hopes to be finishing up her first Ph.D. “Education is something incredibly precious to me, so at this stage in my life and my activism, I am focusing my efforts on making information that is typically only available in higher education more accessible to the Black community,” she explained.

A reality of unity and equity

Peyton likes to think of herself as a 20-year old collection of interactions, conversations, relationships, and lessons. “I think it's cool to think about how everyone is who they are because of their unique story,” she said. “I try to take that perspective into the way I treat others and just how I live my life in general.”

For Peyton, a unified world is one where there are no institutions that thrive off division and stratification. She hopes to see a world where structures are put in place to support, rehabilitate, and uplift struggling populations rather than punish them. “Our generation can build a unified world by not fearing discomfort,” she said. “Sacrificing comfort and questioning the status quo is essential to imagining and creating a reality of unity and equity.”

As a high school student journalist, Peyton broke her echo chamber from a young age. She frequently had conversations with people who disagreed with her, but she learned from those experiences. “I'm fortunate for opportunities to break my echo chamber because I'm able to understand my values better,” she said. “I do this in my class discussions primarily by asking questions to people who express a different perspective than mine.”

“The goal is not to change minds or hearts. It’s to increase understanding.”

When it comes to navigating difficult conversations, Peyton tries to enter a space of understanding and growth. “The goal is not to change minds or hearts. It’s to increase understanding,” she said.

The Conversationalist couldn’t be more grateful for Peyton Wilson for all she does to promote activism and education. Keep up with her on Twitter and follow The Black Knowledge Coalition to learn more about her work.

Come hang out with Peyton and all of our LIST honorees! Join us in Geneva and follow The Conversationalist on Twitter, Instagram, and TikTok to stay up to date with all of our future events.