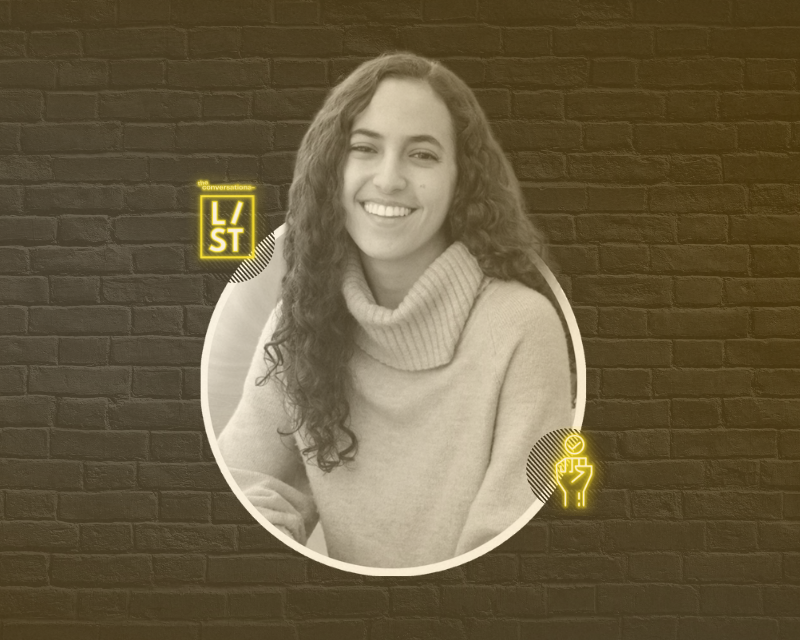 21-year-old Sophia Houdaigui is the daughter of a Moroccan Muslim immigrant father and Jewish Jersey-born mother, committed to making the nation a more understanding place. As a result of her family’s journey, she is passionate about immigration reform, women's rights, national security, and Middle Eastern and North African affairs.

She remembers growing up visiting her Baba’s bagel shop, which was always filled with immigrants from countries worldwide. “I began to notice how my father, uncle, and family friends were treated by members of our community,” she said.

“Currently, there is a lack of accurate immigration education in the United States.”

Sophia wanted to take her personal experience and help make American’s more aware of law and policy implications around immigration. She also wanted to help humanize the immigration process. “Currently, there is a lack of accurate immigration education in the United States,” she said. “This combined with a polarized political climate and economic uncertainty makes understanding the basics and nuances of immigration essential to America.”

Today, Sophia is the Founder of Hyphenated America, an organization committed to making immigration laws and policies easier to understand. In her role, she co-hosts and creates the organization’s podcast, manages the production of research, and leads its creative direction. “At Hyphenated America, we believe that in embracing our identities as hyphenated Americans, we can help make the complex and confusing immigration system, its associated laws and policies more accessible and less intimidating for others,” she said.

"We believe that in embracing our identities as hyphenated Americans, we can help make the complex and confusing immigration system, its associated laws and policies more accessible and less intimidating for others.”

Sophia was honored for her work in the Human Rights space through The ConversationaLIST, our annual honoree list recognizing exceptional Gen Z'ers making an impact. “Immigration reform will not happen overnight,” she said. “It takes breaking barriers between communities and allowing one another to understand our struggles.”

Sophia wants to encourage other young people to find their voice by identifying how they can use their passions to assist their community. “I use my voice for good by amplifying the voices of marginalized communities and making immigration a more accessible topic,” she said.

This spring, Sophia will graduate from Barnard College of Columbia University with a degree in history. She hopes to attend law school in the coming years and explore a career in politics, law, and the arts. “I am inspired by members of our intelligence communities and activists along our border advocating for immigrant communities,” she said.

Sophia believes The Conversationalist's mission to amplify Gen Z voices is consistent with Hyphenated America's focus on uplifting younger generations' research. “The TC community's desire to engage with difficult topics as a means of growing individually and collectively is admirable and something I hope to incorporate more into my daily routine,” she explained.

Sophia believes that in a unified world, individuals take the time to understand one another. She thinks Gen Z is well-positioned to help build this. “Social media presents a unique opportunity to devote to understanding one another's struggles and privileges,” she said.

“I think coming to [difficult] conversations with a point of understanding and desire to understand one another is incredibly important."

To break open her echo chamber, Sophia tries to place herself in uncomfortable situations as a means of growing as an individual. “I think coming to [difficult] conversations with a point of understanding and desire to understand one another is incredibly important,” she said.

Big snaps to Sophia Houdaigui as she uses her voice to speak up for immigrants. Keep up with her on Instagram and follow Hyphenated America to learn more about her work.

Come hang out with Sophia and all of our LIST honorees! Join us in Geneva and follow The Conversationalist on Twitter, Instagram, and TikTok to stay up to date with all of our future events.