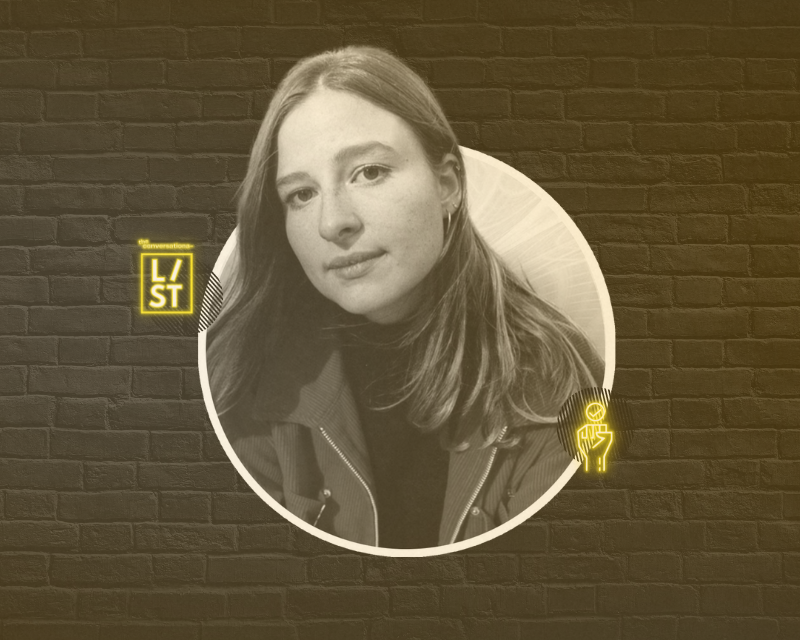 24-year-old Sophie Sandberg is a natural listener, which guides who she is and what she does. She credits this to her upbringing, being raised by two therapists. “I prioritize listening, empathy, and kindness in all of my activism--both with those who I agree with and disagree with,” she said.

When Sophie was 15, she started experiencing street harassment. She remembers feeling silenced and confused and unsure about how to respond to the objectifying comments. She usually just kept walking and ignored them, but she found her voice after writing out responses on the streets in chalk.

“I realized I could use my voice to reclaim public spaces and share many stories of street harassment.”

From there, Sophie took her experience and her knack for listening and founded Catcalls of NYC, an organization dedicated to promoting conversation around the dangers of catcalling, as part of a school project. “It felt very empowering to show the world what had been said in the exact spots where it was being said,” she explained. “I realized I could use my voice to reclaim public spaces and share many stories of street harassment.”

Now, Sophie is the founder of Catcalls of NYC and Chalk Back, a global youth-led chalk art movement against gender-based street harassment inspired by Catcalls of NYC. She was honored for her work in the Human Rights space through The ConversationaLIST, our annual honoree list recognizing exceptional Gen Z'ers making an impact simply by using their voices for good.

At Chalk Back, Sophie and her team share stories of gender-based street harassment with colorful chalk art and provide space for others to speak up about what’s happened to them. “I'm on a mission to end gender-based street harassment because it harshly impacts so many girls, young women, and LGBTQIA+ individuals every day, globally,” she explained. “It's an issue that's often belittled or ignored. I believe "chalking back" is a way for young people to take on this issue on the street level and make our voices heard.”

“Your voice has an impact no matter how large or small the scale.”

Sophie wants other young people to know that they don't need to use a loudspeaker to find their voice. “It's in the details--the conversations you have with close friends, family, or on your social media platform,” she said. “Your voice has an impact no matter how large or small the scale.”

Going forward, Sophie hopes to continue leading Chalk Back as a thriving and sustainable organization and leave behind a legacy of ending street sexual harassment. She also plans to teach workshops on sexual harassment in middle schools, high schools, and universities.

Sophie described The Conversationalist's mission as “awesome” because she thinks it's essential to bridge gaps between people with different views. It also aligns with Catcalls of NYC’s mission which is all about having meaningful, productive dialogue and creating a mutual understanding about the harms of catcalling.

For Sophie, a unified world is a world without street harassment and where everyone can walk in public with respect. As Gen Z, we are more prepared than ever to make meaningful connections and work together for a more just and unified world,” she said.

“By respectfully speaking to them about the issue, I'm able to break open both of our echo chambers of thought.”

To break open her echo chamber, Sophie has conversations on social media and on the street with people who disagree with her. “Many people stop me as I'm chalking and have different points of view--they may think catcalling is a compliment or no big deal,” she explained. “By respectfully speaking to them about the issue, I'm able to break open both of our echo chambers of thought.”

Big snaps to Sophie Sandberg as she uses her voice to end street harassment. Keep up with her on Instagram and follow Chalk Back to learn more about her work.

Come hang out with Sophie and all of our LIST honorees! Join us in Geneva and follow The Conversationalist on Twitter, Instagram, and TikTok to stay up to date with all of our future events.