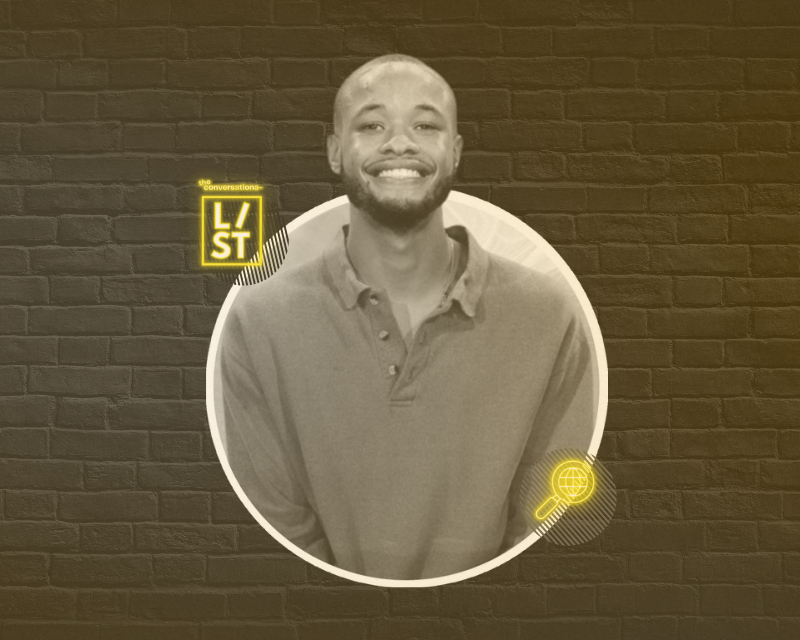 The weight of the world

Last summer, the visible harassment and abuse of Black men and women experienced in America left 21-year-old Julian Crosby feeling numb. To process everything that was going on and to feel more grounded, Julian rekindled his passion for writing. “While writing, I felt as if the weight of the world had been lifted off my shoulders,” he said. “I wanted to grant a similar sense of peace and clarity to other Black people in my community and beyond. In a society that weaponizes Black skin, I wanted to highlight the grace and warmth in the melanin that composes us.”

"In a society that weaponizes Black skin, I wanted to highlight the grace and warmth in the melanin that composes us.”

From there, Julian joined the National Association of Black Journalists at his college. He began thinking of ways to use his voice and talent to promote more Black media organizations on campus. “My passion for art has made me more spiritually connected, and I pride myself on having a warm spirit,” he said. “I love connecting with new people, places, and ideas.”

Julian is the Founder of Gravity Magazine, the online publication at the University of Miami dedicated to uplifting Black creative essence. The magazine brings creators together and celebrates Black culture through digital media, print journalism, fashion, and more. “I did not comprehend the force within my voice until I recognized the impact and educational value of Gravity Magazine’s issues,” he said. “People were learning more about Black culture and the general Black experience in America, and I think that’s all I could ask for.”

"We want people to see Black creators at our most genuine form."

As an exceptional Gen Z’er using his voice for good, he was honored for his Media and Journalism work through The ConversationaLIST. “At the core of Gravity, we want people to see Black creators at our most genuine form, and I am glad people have come to appreciate our approach.”

Julian wants young people to know that people don’t necessarily have to agree with you for your voice to be validated. “Put your thoughts out there, no matter how invalid they may feel in the moment,” he said. “That’s when you know you have found your voice— when you believe in something so much that you are willing to fight for it.

In five years, if all goes according to plan, Julian sees himself in the writers’ room for season 4 of Euphoria or Insecure’s final season. “My goal and legacy I hope to leave behind are making people feel exalted and praised in their skin,” he said.

The crusade for justice

Julian resonates with The Conversationalist’s mission because he believes young people have the power to unify the world. “The future is contingent upon the youth,” he said. “However, we remain barricaded from participating in important discussions. I truly believe this election year, in particular, has galvanized Gen Z’ers across the nation to recognize their strength and force.”

Julian said that a unified world is a world in which everyone collectively minds their business and pursues what makes them happy. He believes Gen Z can build a unified world by simply showing empathy to our neighbors and being kind. “The advent of a deadly pandemic goes to show that life is not guaranteed, and it is up to us to make our time here the best, most cheerful experience for everyone while we can,” he said.

“I accept that I am not the beholder of all knowledge and adjust my beliefs and values as I grow and learn.”

To break open his echo chamber, Julian has uncomfortable conversations about race, gender, economics, and sexuality. “I accept that I am not the beholder of all knowledge and adjust my beliefs and values as I grow and learn,” he said.

Julian has changed his approach to difficult conversations by recognizing that the endgame does not entail someone completely switching their outlook. “Often, we look at difficult conversations as these win-lose battles, putting enormous pressure on individuals to radically change their racist, sexist or homophobic friends with one conversation,” he said. “That’s not always going to be the case. A conversation is a tool that can be used in the crusade for justice, but it must be used often and with careful intention.”

We’ll be rooting for Julian Crosby as he empowers Gen Z to unify for Black lives. Keep up with him on Instagram and follow Gravity Magazine to learn more about his work.

Come hang out with Julian and all of our LIST honorees!  Join us in Geneva and follow The Conversationalist on Twitter, Instagram, and TikTok to stay up to date with all of our future events.