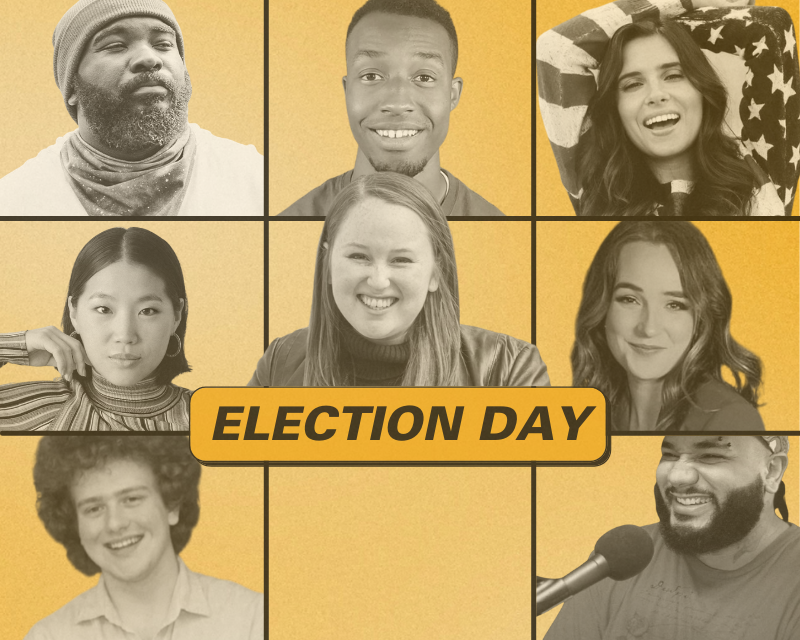 No matter who you voted for on November 3rd, Election Night (or rather, Election Week) was A LOT. Thankfully, The Conversationalist offered its community a reprieve from the early returns. Founder and CEO, Sophie Beren, led a panel of seven activists, influencers, writers, and artists from across the political spectrum to discuss unifying as a nation, and a generation, in anticipation of the results. Although the entire country was on edge, the panel offered a place for civil discourse and mutual respect around some of the most polarizing issues at stake.

Can you share an experience where you unified with someone you disagreed with?

Hip-hop artist and activist Christopher Townsend, better known as Topher, reflected on an experience he had with Black Lives Matter protestors at the Unsilent March in Washington D.C. “They didn't want to have a conversation, even with me. I figured since we are the same race, we can have a good conversation and relay the information that so many people have for them,” he said. “They didn't want to have a conversation. It got into a whole debacle and ended up on Fox News.”

Sam Weinberg, the founder of Settle for Biden, spoke about his experience living on the Israeli-Palestine border. “What unites people as people transcends what divides us, and that can be limited to the borders,” he said. “At the end of the day, people are people regardless of ideology, ethnicity, or religion.”

TikTok influencer and activist Tyler Bluntman said that he can unify more with Republicans than the left and cites his friendship with Topher as an example. Although Tyler is a conservative, he is not a Trump supporter. “I think it’s just about trying to reach out to people and have those discussions rather than just thinking, oh you’re wrong,” he said.

How do you unify with people both in and out of your political party?

“I think it’s important to remember that we’re all just people, and we all have the same common goal - to have the best life possible,” said Heather Garnder, who currently hosts Last Night’s Late Night by Entertainment Weekly. “The rest is just semantics. Voting for Trump or voting for Biden is just your version of how to get to that point.”.

When you think of unity, what comes to mind?

Alexandra Lains is a conservative singer-songwriter and social media commentator. She appreciated Heather’s point about people having the same goals and different ideas about reaching them. “I’m the type of person where if I have a conversation with someone who disagrees with my political views, I’m not necessarily trying to change their mind,” she said. “I’m trying to find common ground.”

Sophie pointed out that this is precisely the mission of The Conversationalist.

Chinese-American multimedia journalist and video director Sophia Li said the climate is an area where she often finds common ground with people across the aisle. “None of this matters if we don’t have a healthy climate,” she said and added that polarization is possibly the most significant issue facing our country.

Joel Patrick, also known as the "Legendary Black Redneck,” attended Akron University with Caitlin Bennet, a polarizing figure on social media. In one instance, he calmed down a group that disagreed with her and found some issues they agreed on. However, he disagreed with the previous point and spoke to his opposition toward “agreeing to disagree” on conservative issues. “I don't think all roads lead to Rome. I don't think we all believe the same thing and are coming at it from different ways,” he said. “I believe we believe fundamentally different things and that if I’m not changing your mind, then I don't truly believe what I believe.”

Sam agreed with Joel but from the opposite side of the aisle. He is unwilling to compromise on some progressive values. “At the end of the day, you know people do want a better future,” he said. “It just depends on if that better future comes at the cost of other people's well-being.”

What is an issue you are passionate about, and what is the best path forward to unify on that particular issue?

As a pro-life activist, Topher believes abortion is murder and is unwilling to agree with anyone on the other side of the issue.

Heather said that reproductive rights are also driving her to vote and that she was grateful to finally speak on the topic as a woman on the panel. She is concerned about what actions Donald Trump and the Supreme Court might take on the issue. “It's not just the lives of babies or fetuses,” she said. “It's women's lives that are at stake here too.” She added that it might be possible to find unity on that issue by promoting birth control.

How can we unify as a generation and a nation going forward?

Joel said that the nation needs to unify around law and order and the promotion of patriotism. “We need to understand as a people that if someone is burning down a Black business and destroying a Black neighborhood, that person does not have the best interest of black people in mind,” he said.

“If it's another four years with an administration that denies climate change, we're not going to have a future in itself,” Sophia said. She also said that it’s important to understand that patriotism doesn’t always look one specific way, and critiquing the government can be a sign of respect.

Tyler emphasized the importance of continuing these conversations with people who have differing opinions and breaking open your echo chambers. He noted that he believes in protecting individual rights and keeping the government small as a constitutionalist, whereas the political left wants to focus on a collective good.

Alexandra said she loves America and is proud of the country. Still, in a recent video, she was called a racist for sitting in front of the American flag and that she believes being criticized for showing patriotism is an issue. “We should be accepting of what people want to celebrate, and calling people racist or throwing insults at them isn't going to further a conversation. It isn't going to further your idea or standpoint,” she said.

Do you have any final thoughts or advice to share with young people going into the election? Did this conversation break open your echo chamber?

Joel said that the conversation didn’t break open his echo chamber because he frequently converses with people who have different perspectives. “I don't just like to sit in the conservative echo chamber and listen to conservative. I believe that if you believe what you believe, you change other people's minds with that,” he said. “If you believe you have the truth, you share the truth.”

Heather said she keeps her Facebook page open to be aware of other perspectives, especially since other apps tend to have an algorithm that favors her biases. “What I think we can do to encourage more open thinking open-mindedness. I did not agree with half of what was said tonight,” she said. “My heart was beating the whole time because I just wanted to unmute and just go at it, but I didn't because that's not the place for this.”

Sophie encouraged everyone to break their echo chambers by following each of the panelists on social media.

Topher said he hoped to see people stop telling Black people what to think and believe. “It's already cutting us out of the conversation, and it also puts us in a spot where we're not allowed to express ourselves and doesn't show the true beauty within our community or show the beauty of the progression of America,” he said and added that he doesn’t build echo chambers in his life and encouraged everyone to expresses their beliefs.

Sophia said she wanted to yell “no uterus, no opinion” during the conversation as a woman who has had an abortion. But she said that having a difference in opinion is good for evolution and strengthening our democracy and warned of the two-party system’s dangers. “If we stop the conversation, we just become polarized and end up hating the enemy instead of bringing that enemy to the table,” she said.

Since other panelists touched on his point, Tyler spoke to the struggles of being a political influencer. He encouraged people to think twice about getting into the social media space and avoid it if they can’t handle the backlash.

Alexandra said that people need to stop putting all their energy into silencing others and noted Instagram’s purge of conservative accounts. She also spoke about receiving death threats on social media. “I do have a lot of conversations with people that disagree with me, and the majority of the time, we leave those conversations still with our same viewpoints, but we have a better understanding of each other,” she said. “I think that's what we need to continue to work towards because, at the end of the day, our neighbors are still going to be our neighbors.”