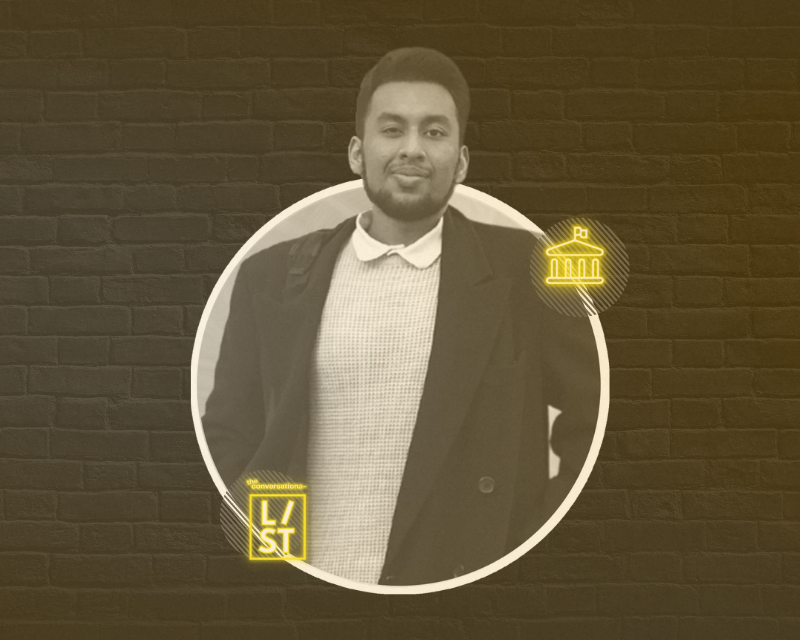 Adrian Ghainda is lifting his hometown through political action

When 21-year-old Adrian was growing up, politics was always presented as black and white. “I grew up in a house where my Brown immigrant parents and relatives idolized the Republican party, a party that demonized them for escaping their country to seek a better life,” he recalled.

He remembers having conversations with his family during the 2008 election. They planned to vote against Barack Obama because they didn’t believe the United States could have a Black president. “I remember using my voice to articulate that a person shouldn't be demonized for running a Presidential campaign on account of their race, and was told I was out of line for speaking back to the adult,“ he said. “That was the moment I realized that I needed to read more, study more, and educate myself on American politics before I attempt to start educating others. Twelve years later, I would say I found my voice and helped others find their voices as well.”

“I remember using my voice to articulate that a person shouldn't be demonized for running a Presidential campaign on account of their race, and was told I was out of line for speaking back to the adult."

Adrian embarked on his journey to harness the power of his voice during his time as an undergraduate student at New Jersey City University when started his first internship with The Borgen Project. “All it took was one internship to let me get my foot in the door, one organization that gave me a chance to use my voice to speak on issues that need to be addressed by the voices that lead in American politics.”

Adrian is an intern with Jersey City Councilman-At-Large Rolando Lavarro, where he specializes in community engagement, social media management, and local political issues. As a resident of Jersey City, he stays updated on local issues, participates in City Council meetings, and encourages friends and family to speak out on issues and educates. He also manages his own Political Blog covering topics from local politics, U.S. politics, and international politics.

As an exceptional Gen Z’er making an impact, he was honored for his work in politics through The ConversationaLIST. Every day, Adrian uses his voice to advocate for progressive causes and educate himself and others to harness their full potential against the status quo of the current American political system.“We need to show up for marginalized communities, so they aren't exploited,” he said about his work. “Taking the big fight to Jersey City's political machine is what drives me to keep doing work in my community, so hard-working people aren't taken advantage of and pushed aside.”

“We need to show up for marginalized communities, so they aren't exploited.”

Adrian suggests that young people should focus on taking small steps in their journey to find their voice. This could look like talking through ideas with friends and family or joining groups that share your ideals. “All it takes is one meaningful conversation to inspire you to pursue your voice,” he said.

Going forward, Adrian plans to continue working in local coalitions in Jersey City and to start updating his blog regularly again. He hopes to continue educating himself and others on civic engagement and organizing. After finishing his Master’s Program and pursuing a doctorate, he wants to run for office in New Jersey.

Adrian said The Conversationalist's mission resonates with him because he believes Gen Z's most vital assets are their voices. He was motivated to join the community and expand his network among his fellow Gen Z. “We are so adamant in the causes we believe in, the causes we fight tooth and nail for, the same causes we pour our time, energy, resources, blood, sweat, and tears for,” he explained.

For Adrian, a unified world isn’t divided on basic human rights and allows individuals to co-exist without fear of being ostracized for their differences, and encourages people to collaborate for the greater good.

Adrian believes Gen Z can achieve a unified world by continuing to use their skills and mindset to build from the ground up. “The social hierarchy that exists in many of our social, economic, political institutions amongst others needs to be torn down and rebuilt for everyone, rather than the select few that reap the benefits,” he explains. “We need to recognize the intersectionality of our individualized capacities and come together to alleviate the disparities that keep us divided.”

“We need to recognize the intersectionality of our individualized capacities and come together to alleviate the disparities that keep us divided.”

To break open his echo chamber, Adrian says he does best to do research before making any assumptions about an issue. “I've learned that not every piece of information we get should be taken at face value, and it doesn't hurt to double-check it,” he said. “As a generation, we can break open our echo chambers by educating ourselves and others on beliefs and situations that have been reinforced for us to take at face value and diverting from that.”

When Adrian approaches difficult conversations he tries to stick to information supported by facts, studies, statistics, and reputable sources rather than relying on emotion. Still, he acknowledges that it’s okay to set boundaries and walk away from a harmful conversation. “While cancel culture isn't the answer if a person refuses to let themselves be educated on an issue, and they still support coalitions, policy initiatives, or political figures that are detrimental to your well-being and the well-being of others, then it's okay to let go of that person,” he said.

The Conversationalist is rooting for Adrian Ghainda as he empowers his community to seek a better world. Keep up with him on Instagram to learn more about his work.

Come hang out with Adrian and all of our LIST honorees! Join us in Geneva and follow The Conversationalist on Twitter, Instagram, and TikTok to stay up to date with all of our future events.