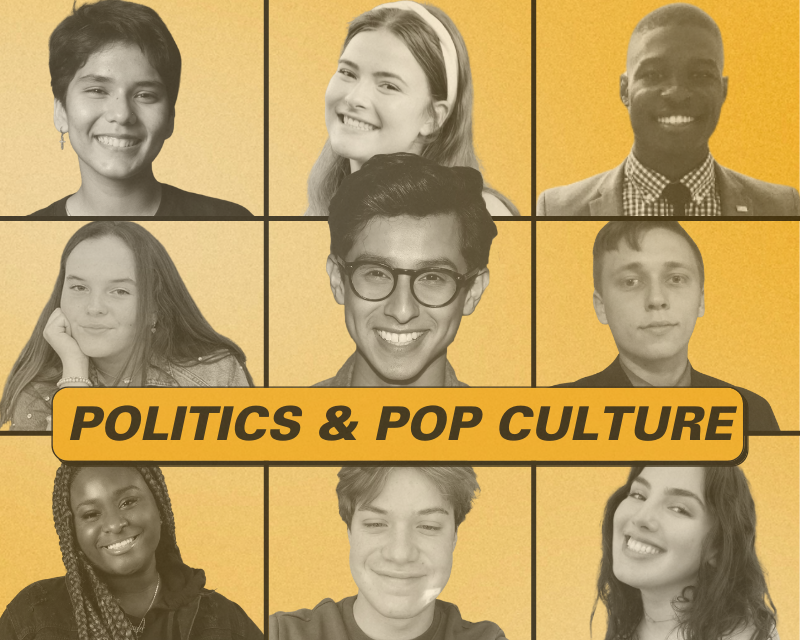 Politics and Pop Culture with Frankie A. Rodriguez

Politics and Pop Culture with Frankie A. Rodriguez

In the weeks and months leading up to the election, it seemed like political messages were everywhere. Films and TV shows addressed political topics, and every other post on Instagram was an influencer reminding their audience to get out the vote. On November 3, Gen Z came out to vote in record numbers. Pop culture and social media’s influence on turnout isn’t totally clear, but since Gen Z is the most online generation to date, it certainly played an important role.

On September 29, The Conversationalist’s Founder and CEO, Sophie Beren, joined actor Frankie A. Rodriguez and a group of wise Gen Z panelists to discuss the relationship between pop culture and politics ahead of the 2020 election. The conversation centered around the impact of social media’s political messages, what it means for celebrities to speak up on important topics, and the importance of showing respect and openness in the face of differences.

Bop to the sky, baby!

When you think of the connection between pop culture and politics, what comes to mind?

“I think there’s a strong relationship there,” said Cyn Gomez, a UC Berkeley student and a social activist. They noted that pop culture, and who it puts at the forefront of a given conversation, has an important impact on politics.

Ramaya Thomas, a student at Atlanta International School and the co-founder of We Spark Change, said pop culture is about what is popular right now. Politics is anything we can be opinionated about.

How can pop culture influence politics?

Isaac Soto, a senior at Santa Ynez High School, pointed to how TikTok elevates youth voices in the political community. “In older generations, we see that the voices that represent us are chosen for us. Apps like TikTok, which are user-based, allow anyone to have a voice,” he said.

Rodriguez offered several examples of popular media that address politics, such as the film  American Hustle, the TV show Scandal, and the songs “Born This Way” and “American Idiot.”

How have you seen politics play out in various aspects of pop culture?

Bella Santos, a senior at Manchester High School, said she’s a Taylor Swift fan and recently watched her documentary, Miss Americana. In the film, Swift addressed feeling silenced and spoke out about her political beliefs even when she was advised not to. Bella said it’s inspiring to see someone with such a prominent platform address politics.

Have you been impacted by political messages in pop culture, either directly or indirectly?

Ava Browne, an actress and high school student from Louisville, said she’s impacted by what she sees on social media, particularly during the quarantine. “We see these things every day, and everything we see affects our opinion,” she said. She added that she believes pop culture is the future of our politics because it brings the Gen Z community together to make an impact.‍

Javon A. Price, a senior at Georgetown University and member of Gen z GOP noted Ruth Bader Ginsburg’s recent passing and the impact she had on pop culture throughout her life. He offered her reputation as the “Notorious RBG” and how intellectual rap addresses issues, such as the Black Lives Matter movement, as examples of how social media and pop culture give us avenues to explore politics.

Do you think pop culture should be political?

Thomas said that everything is political because everyone will always have an opinion on a given issue, saying that pop culture shouldn’t be politically limited. “Politics allows us to have an opinion and different perspectives, and I think that adds great value to pop culture,” she said.

“There’s no way to avoid it at this point,” Maya Klareich, a student at Brandeis University, said, adding that when political topics come up in pop culture, it helps start conversations within communities such as households and schools.

Do entertainment and media have the potential to seriously impact our government and create positive change?

Cyn said that the media’s influence is less about our current government and more about mobilizing the next generation and making progress on representation. They cited Netflix’s The Politician as a show that did both things for them. “As an LBGT person, that wasn’t there for me ten years ago,” they said. “Seeing all these platforms given to young people, we finally realize that this isn’t unattainable anymore.”

Why do some celebrities do or do not feel comfortable sharing their views publicly?

Isaac said some celebrities might be worried about getting backlash from their following. “It could be that they are afraid certain political beliefs will get rejected,” he said, citing Kanye West, who got backlash for expressing his conservative beliefs.

Should public figures disclose their political views at all?

Ava agreed that many celebrities are afraid to do so, adding that those who express their opinions should listen to others.

Javon, who identifies as a Republican and a member of the LGBT community, said he sees a difference in reaction when celebrities express conservative views versus liberal views. “That respect is often lost in social media environments because of the mob mentality,” he said. “It’s up to our generation to change that. There’s usually a reason why people believe what they believe.”

Cyn thanked Javon for sharing his perspective and noted that they are both LGBT but have different beliefs. “Being a part of a community doesn’t look like one thing,” they said. “Cancel culture can be detrimental, especially for people trying to show their authentic selves. We forget they’re human from behind a screen.”

Ramaya agreed and said that hearing from Javon helped her realize how detrimental cancel culture can be. “If we continually progress this idea of cancel culture, will we ever be able to progress as a society?” she said. “We need to be more open to progression, and we have to be less reactive and more proactive to make that happen.”

What responsibilities do you think celebrities have with their platforms and does it extend to politics?

Ava said celebrities' fan bases look up to them, and when they post their opinions and accept others’ views, it invites conversation.

As technology has evolved, how has the relationship between technology and pop culture changed?

Javon believes technology and pop culture are more connected than ever and pointed to the ubiquitousness of technology and how things can go viral quickly.

Isaac said the election is impacted by everyone having an opinion and wanting an outlet to share that opinion. “It allows a rapid spread of information about all of the different candidates,” he said. Every time he went onto social media, he learned new information about a given candidate.

“It’s mobilizing people,” Cyn said about pop culture. “I know a lot of young people are feeling the severity and the weight of this election because so much rides on it.”

Maya said that pop culture and messages on social media platforms are encouraging people to register to vote.

How did this conversation break open your echo chamber?

Bella has many friends and acquaintances who are polarized in the way they think, and it was refreshing to connect with people who can see past their own beliefs.

“I find myself caught in my echo chamber constantly because of my social circles, where I grew up, where I go to college,” Maya said. “While I stand by my own opinions, it’s incredible to hear others.”

Javon said that as a conservative living in Washington D.C., he’s used to being around people who disagree with him. He encouraged the panel to break down echo chambers not only digitally but in real life.

“We can’t progress if we don’t talk about things,” Ramaya said. “I want to thank The Conversationalist for opening the floor to this conversation today.”

Shoutout to these Gen Z’ers for reminding us that even in our differences, “we’re all in this together.”

After saying goodbye to the panelists, Frankie spoke with Sophie about his takeaways from the panel and answered audience questions about topics such as his experience talking about politics online and his groundbreaking role in High School Musical: The Musical: The Series.

“You can’t just be so comfortable and so stubborn with your views,” he said. “You have to see the other side. I think social media, especially right now, it’s one or the other with no in-between. I think for me going forward with this election, you have to cover all of your bases.”