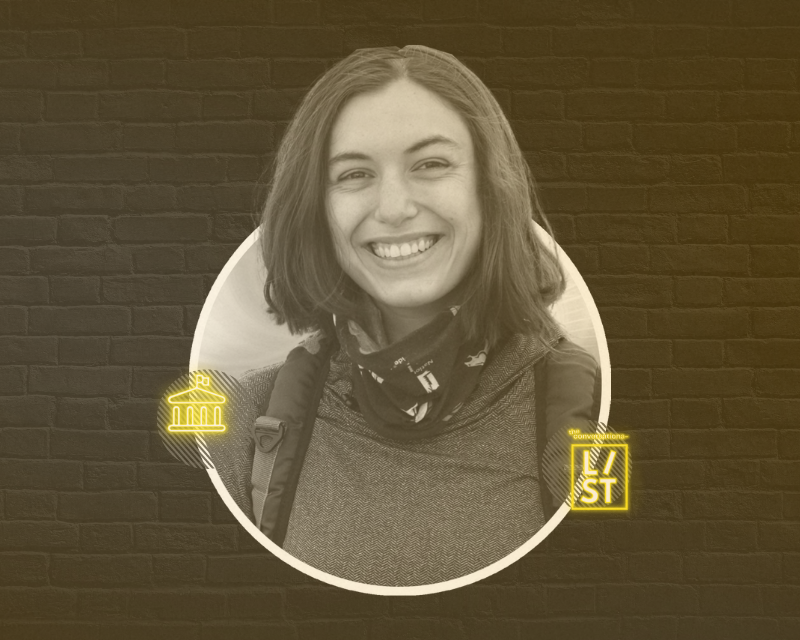 Ellie Sullum is using her voice to mobilize her community

Fitting into the equation

22-year-old Ellie Sullum always knew she had a knack for storytelling, but she didn’t know the best way to find her confidence and share her voice with the world. When she was 16, everything changed when the Supreme Court legalized same-sex marriage. “My friends and I spent the whole day celebrating, and I remember trying to figure out just how I fit into that equation,” she recalled. “Am I an ally or a member of the community?"

Ellie knew she wasn’t alone in feeling introspective following that event, and by the time she started her last year of high school, she wanted to use her voice and reach others who could relate. “Maybe if teen spaces were more inclusive - truly inclusive - then kids like me could have a safe space to both be themselves and figure out who they are,” she said.

“Maybe if teen spaces were more inclusive - truly inclusive - then kids like me could have a safe space to both be themselves and figure out who they are.”

As a leader in her teen Jewish youth movement, Ellie decided to use her influence and relationships to create a platform designed to make the movement's spaces inclusive. In 2016, she created Safe Zone, which started as an initiative to make the youth movement safe and welcoming for LGBTQ+ teens. “I ran trainings for adult advisors to answer their questions about pronoun use, creating space for queer teens to be themselves, and the like,” she explained. “The movement is historically rooted in gender roles - creating an immediate barrier for teens who don't conform to traditional gender norms. We began to tackle those barriers and build recommendations for making traditional programming less gendered.”

Through this experience, Ellie learned that she had a knack for strategic political activism and relational community organizing in addition to being a storyteller. Over the last five years, she has become involved in voter engagement, local anti-racist organizing, and local gun safety awareness.

As the founder of Keystone Common Ground Collective, a community-powered network, Ellie facilitates conversation around gun safety for young Pennsylvanians across the state. Before that, she was a founding member of the DubCForOurLives Coalition, an organizing hub focused on the aftermath of the Parkland shooting. Ellie said gun safety in Pennsylvania is a complicated and layered issue. Her work brings people together to unravel the issue piece by piece and find common ground. She archives this by being an honest storyteller and respectful facilitator. “In a time where people feel more divided than ever, my mission is to help young people find common ground and consensus,” she said.

“In a time where people feel more divided than ever, my mission is to help young people find common ground and consensus.”

As an exceptional Gen-Z’er making an impact, she was honored for her work in politics through The ConversationaLIST. “I believe in the power of dialogue and building community,” she said. “As someone with experience talking with people of all different political and life backgrounds, I see the inherent value in bringing people together to have these conversations themselves in a safe and positive environment.”

Ellie reminds her fellow Gen Z’ers that realizing that her voice mattered, and finding the best way to use it, took time. She suggests that young people keep using their voices in different ways until something clicks for them. “Take the time you need to identify what makes you feel empowered and what types of leadership qualities you possess,” she said. “It won't happen overnight. It gets uncomfortable and stressful, and sometimes frustrating. Once you find your voice, the work has just begun. You have to refine it and align it with your skillset and the outlets you want to use to create change.”

In 5 years, Ellie intends to be finishing law school. She wants to have a career as an elections lawyer, fighting for equitable ballot access and fair elections. In the meantime, she wants to continue working in elections and politics as a speechwriter so she can be part of shaping elected official’s narratives. “Out of all the work I've involved myself with, I feel most connected to voter engagement and elections,” she explained. “After six years of activism and one year as a young professional, I feel confident with the knowledge that voter empowerment is my specialty.”

Ellie appreciates The Conversationalist community’s power to bring people together to have honest, respectful conversations about the world. Most of all, she finds that the organization offers a space full of hope and people who are growing together. “The goal is not for us to convince each other of a certain point of view, but for us to see and affirm the perspectives of others,” she said. “It's a space for us to hear each other out, in a respectful setting. It's for us to unlearn biases and throw away negative stereotypes. And a place for us to bond over what we have in common - like rooting for the same NFL team or wanting to travel to the same places.”

Ellie believes that unification happens when communities reach consensus and a common goal established. “I believe unity begins with education and conversation,” she said. “Building unity requires a change in mindset.”

“A unified world is not one where everyone agrees, but one where respect is given, and people can coexist.”

She hopes Gen Z can bring people together by empowering each other to have honest conversations. “A unified world is not one where everyone agrees, but one where respect is given, and people can coexist,” she said.

To break open her echo chamber, Ellie tries to put herself in spaces with people who don’t agree with her on everything. She says this mostly happens naturally. “The friends I made in high school, college, and since graduation with whom I still keep in touch come from all different life and political backgrounds, and we don't agree on everything,” she explained. “Just talking with them helps widen my perspective.”

The Conversationalist couldn’t be more excited to see Ellie Sullum take on the world. Keep up with her on Instagram and follow Keystone Common Ground Collective to learn more about her work.

Come hang out with Ellie and all of our LIST honorees! Join us in Geneva and follow The Conversationalist on Twitter, Instagram, and TikTok to stay up to date with all of our future events.