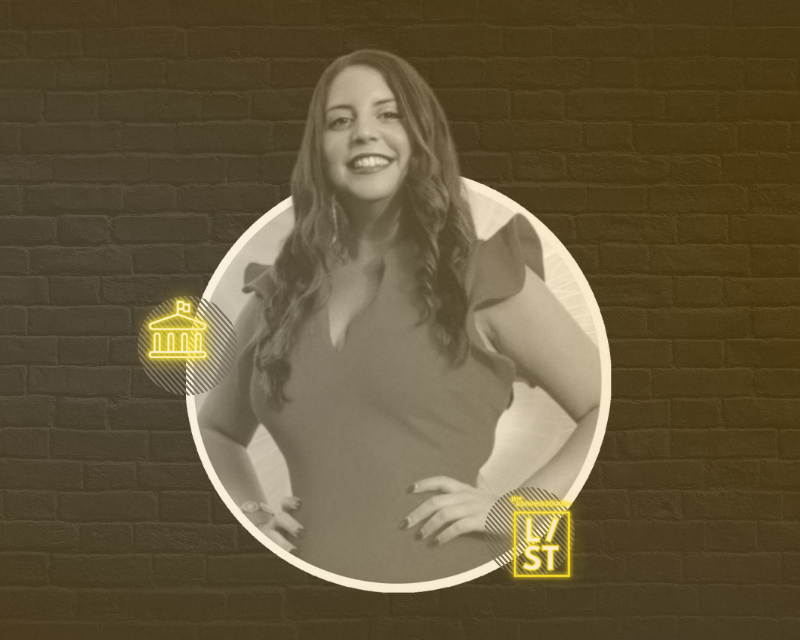 Isabella D’Alacio is drawing on her personal experience to fight for gun safety.

As a child, 20-year-old Isabella D’Alacio grew up listening to her family’s stories of fleeing Cuba in the 1960s. She learned how the trauma from escaping a dictatorship shaped their hope for a better future in the United States. However, as a Gen Z’er facing the climate crisis, gun violence, racial injustice, and more, Isabella’s experience has been far different than the one her family imagined. “For us young people, it seems trauma has been a prevailing norm,” she explained. “My family came here seeking political freedom, but my generation has not experienced this promise.”

“My family came here seeking political freedom, but my generation has not experienced this promise.”

Today, Isabella’s life mission is to create the free and equitable future that her family envisioned when they came to the United States.

Her journey truly began after the Parkland shooting took place in her county. “I used to live in Parkland, and my sister had attended Marjory Stoneman Douglas High School, so the shooting hit close to home for me,” she recalled. “I remember getting text messages of videos of students on the floor bleeding, and shots being fired while it was happening and immediately becoming traumatized.”

After starting college, she found that her trauma stayed with her. She wanted to find ways to honor those who lost their lives that day. She got involved with March For Our Lives and Team ENOUGH through their youth-led lobbying collective. “Since then, I have just gone further in the gun violence prevention movement and as I learned more about the intersections of gun violence to my life experiences like homelessness, immigration, and not having access to healthcare,” she said.

As a Federal Policy Associate at March for Our Lives, Isabella oversees federal legislative initiatives throughout the organization. She pays close attention to national policy that pertains to gun violence prevention while also lobbying Congress Members for gun safety bills. As the President of IGNITE at George Mason University, she advocates for the representation of women in all levels of elected office. She also serves as an executive member on Team ENOUGH, focusing on initiatives of gun violence prevention. In 2020, she worked as the Florida Relational Organizer for United We Dream Action and Latinx youth voter turnout in swing states.

As an exceptional Gen Z’er making an impact, she was honored for her work in politics through The ConversationaLIST. In all of her work, Isabella advocates for a more equitable future for everyone. “I use my voice to bring awareness through my lived experiences and draw these connections to the intersectional issues marginalized individuals face every day,” she said.

“Taking care of yourself is the most important thing because when you love yourself, you can love the world in a whole different way.”

For Isabella, knowledge is power. She believes that education and being aware of what’s going on in the world are essential aspects of finding your voice. She also encourages young people to lean on their lived experiences. Still, she emphasizes that it’s crucial to pursue healing before advocating for change. “Taking care of yourself is the most important thing because when you love yourself, you can love the world in a whole different way,” she explained. “It is okay to not ever be able to advocate for something that deeply affected you, but empathy for others and their lived experiences is also a way of finding your voice and advocating for change.”

While she can’t say for sure what the future holds for her, Isabella hopes to attend law school and continue to fight for equitable policy. “I hope people will remember me as a radical change-maker who advocates for love,” she said. “I want to help people see how we can entirely reimagine our world, and create a world that will be sustainable and equitable for all, and let that new system carry on.”

Meeting people where they are

Isabella resonates with The Conversationalist's mission because her advocacy stems from building an equitable future for all. She believes that listening to one another and unifying the world is an important step to doing so. “I think finding your voice is a big aspect of breaking echo chambers, and the more Gen Z speak up, the more changes we will see because we will realize how alike we are,” she said.

She hopes to see Gen Z build a unified world by listening to others, being willing to fight for people they don't know, and showing empathy to others.

“Simply asking a random person, "how are you" can lead to an entirely new conversation that allows me to know something about the world I may have never known.”

To break open her echo chamber, Isabella takes the initiative to listen to people from various backgrounds. She also tries to follow and connect with new people online to get a bigger picture of what’s going on globally. “Simply asking a random person, "how are you" can lead to an entirely new conversation that allows me to know something about the world I may have never known,” she said.

When it comes to tackling difficult conversations, Isabella said it’s important to meet people where they are. “At times, it is hard debating things that are so personal to you, like basic human rights,” she said. “But it is important to approach these conversations with mutual respect. Try to reason with people with what they already know and your own experience that cannot be debated.”

Big snaps to Isabella D’Alacio as she pursues a more just world. Keep up with her on Instagram and follow Team Enough and March for Our Lives to learn more about his work.

Come hang out with Isabella and all of our LIST honorees! Join us in Geneva and follow The Conversationalist on Twitter, Instagram, and TikTok to stay up to date with all of our future events.