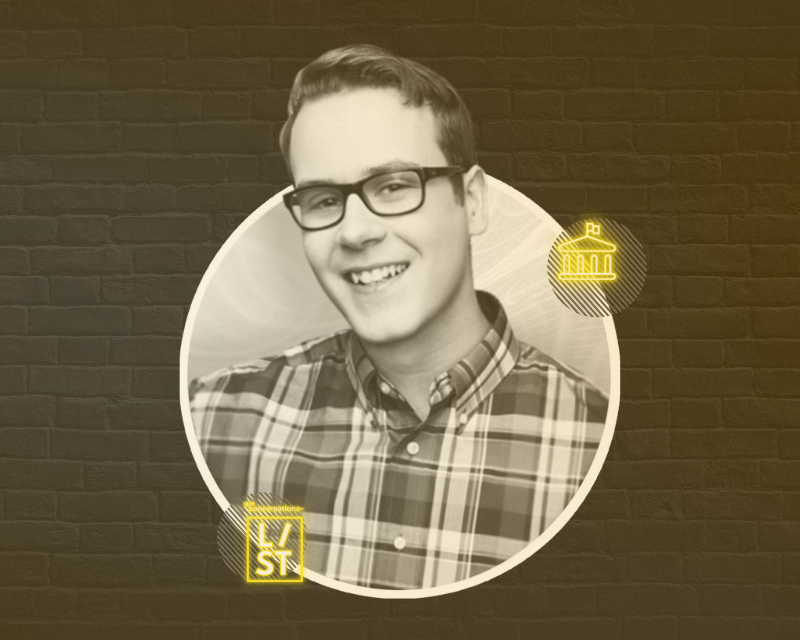 When 21-year-old Jordan Ramsay was in elementary school, he was concerned about developers cutting down local forests in his community and his school’s lack of an effective recycling system. Despite his young age, he testified before local leaders and started a school-wide recycling campaign. “I realized that it is necessary to intervene on these seemingly small issues because sometimes no one else will,” Jordan recalled. “This momentum has inspired me, and I’ve taken these methods to new places like the electoral arena.”

"After coming out and feeling confident in my voice, I realized that keeping it to myself would only be harmful to the millions of queer kids currently going through similar things to what I experienced.”

Jordan’s journey to find his footing in politics has also been informed by his identity as a member of the LGBTQ+ community. He explained that early on in his coming out experience, he could liberate from the negative self-image that many young LGBTQ+ people experience. “It is a lonely and unbelievably scary process, but strength and compassion are born from it,” he explained about coming out. “I think that’s why the LGBTQ+ community is so focused on resilience and acceptance. After coming out and feeling confident in my voice, I realized that keeping it to myself would only be harmful to the millions of queer kids currently going through similar things to what I experienced.”

Focusing on what matters

Now Jordan is a political activist, using his voice to get queer teens and allies involved in politics, starting by advocating for progressive policies in their local communities. He worked on Pete Buttigieg’s presidential campaign and worked in the Office of Barack and Michelle Obama. As an exceptional Gen Z’er making an impact, he was honored for his work in politics through The ConversationaLIST. “I am trying to help define the sociopolitical impulse of our generation to ensure a bold and unified future, like closing the achievement gap based on socioeconomic status,” he said.

For Jordan, growing up in a working-class household meant affording college and other necessities was never a guarantee. “I’m doing this work so that future teens like me get to grow up focusing on what should matter: learning, socializing, and self-discovery, not crushing debt or a lack of access to resources that help them realize their full potential,” he said.

“Above all, know that no one in this entire world can speak with the same perspective as you.”

Jordan suggests grabbing some paper and writing down twenty things you believe into a journal of personal truths and passions. “Above all, know that no one in this entire world can speak with the same perspective as you,” he said. “That’s the most beautiful strength you get to share with the rest of the Earth for the short time we’re all here together.”

In the next five years, Jordan hopes to be closer to the most authentic version of himself and to have helped others with their self-discovery journey. He also plans to continue working to elect progressive leaders focused on a bold plan of systemic injustice, corruption, climate change, healthcare, and student debt.

During such an unprecedented time, Jordan admires that The Conversationalist exposes young people to hear from various perspectives and consider the things that unite us rather than divide us. “The TC mission is the launchpad for the unified world we need to know peace,” he said.

Jordan believes that a unified world is an equitable world, and we will know we have achieved this when we see a good quality of life and respect for all humans, regardless of their background. He hopes Gen Z can work toward this by implementing bold and research-based solutions to the problems that face our world. “Michelle Obama once told me that many of us think in black and white, but that real change happens in the gray,” he said. “We need to learn to be comfortable with being in the uncomfortable territory because that is where the boldest change is made.”

“Michelle Obama once told me that many of us think in black and white, but that real change happens in the gray.”

To break open his echo chamber, Jordan is careful to include people with different lived experiences in his inner circle. He finds that doing this helps improve the information he takes in and what he puts back into the world. “If you’re a progressive, make sure you read up just as much about free markets as you do about free healthcare,” he explained. “You’re much better off understanding a wide issue area rather than being an expert on the elements of your opinion.”

In trying to reach common ground with someone he disagrees with, Jordan tries to determine what motivates the other person’s belief, speaks respectfully, and avoids backing down when someone makes him feel weak. “Call people “in” rather than “out,” he said. “From there, I can work on building a network of information-sharing: my one page in the library of building a unified world.”

All the snaps to Jordan Ramsay on his mission to empower Gen Z. Keep up with him on Instagram to learn more about his work.

Come hang out with Jordan and all of our LIST honorees! Join us in Geneva and follow The Conversationalist on Twitter, Instagram, and TikTok to stay up to date with all of our future events.