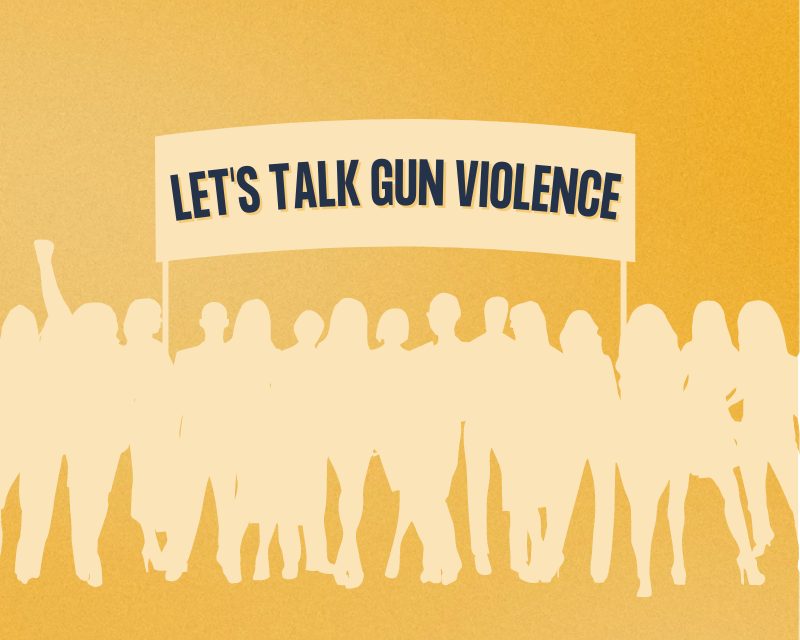 Here at The Conversationalist, we believe in providing a platform where every voice is heard, and every perspective is respected. Every Monday at 9 p.m. EST in our Geneva community, we host And We’re LIVE!—a conversational event to discuss a current event or trending topic. For this week’s discussion, we focused our conversation on gun violence.

The topic of gun violence can be difficult to discuss due to its sensitivity. However, it’s important to have conversations on controversial subjects because that is how change is made: through action and education.

According to the Gun Violence Archive, there have been 157 mass shootings—which they define “ONLY on the numeric value of 4 or more shot or killed, not including the shooter”—in 2021 so far. Recent incidents include Boulder, Colorado, the FedEx shooting in Indianapolis, and the Atlanta spa shooting.

Conversations around gun violence are often split between two extremes: pro-guns and anti-guns. To break out of our echo-chambers, we must take the time to consider not only opposing perspectives, but those in between; perspectives that are in the grey area. We can create change that benefits everyone and do so unified.

Our conversation included initial reactions and thoughts, the Biden-Harris administration’s policy proposal for gun violence prevention,  action community members would like to see in response to gun violence, and how to approach the conversation outside of the TC community.

Here are some perspectives to consider:

1. Gun violence is larger than a political party:

It’s easy to give into stereotypes surrounding the issue of gun violence, but gun violence affects everyone regardless of their political beliefs. As several community members point out, gun violence should be a non partisan issue. Change happens through unity, not polarization.

2. Policies are one thing. Enforcement is another:

Gun violence is not a new issue. Over the last four years, there have been over 350 mass shootings; almost one for each day. In response to most incidents, legislation for gun violence prevention is proposed and oftentimes passed—however, what many members pointed out was the lack of enforcement following the policies.

3. Some believe we should separate the gun from the gun violence:

Several community members point out that while guns are the machinery being used, it is not the root cause of the violence. It is an issue much bigger than the weapon itself. And it’s also possible to want gun violence prevention and to still protect the right to bear arms.

4. The issue is far more than just the guns:

Research shows that several social and economic circumstances make certain demographics more prone to engaging in gun violence, including poverty and mental health. Rather than focusing entirely on the weapon, several members want to highlight the factors that lead people to gun violence:

5. To prevent future shootings, some suggest required courses on gun safety and background checks before purchase:

Guns may not be the root cause of the issue, but there can be regulations and restrictions to reform the distribution of the machinery. Requirements like mandatory gun safety courses and stricter background checks could help prevent gun-related accidents and keep guns from those who would be more susceptible to use the weapons in times of crisis or for hate-crimes.

6. When discussing gun violence with someone who has personal experience, it’s important to be sensitive and have empathy regardless of your personal beliefs:

Personal experiences are, well, personal. And it is extremely important when discussing a topic as sensitive as gun violence with someone who has personal experience on the matter, whether it be directly or second-hand, to validate their perspective regardless of what your personal beliefs are.

Empathy is at the heart of any constructive conversation. We can still unify and have differing beliefs because we have respect for each other’s opinions.

7. Word choice is crucial to a constructive conversation:

Word choice means everything in conversations, especially with sensitive topics like gun violence. As Sophie Beren suggests below, rather than using the phrase “gun control”, swap it out for “gun violence prevention”. It helps avoid stereotypes within the conversation and places emphasis on the belief that gun violence is a non partisan issue.

8. There isn’t a direct solution to gun violence. But at the end of the day, something needs to change:

Thanks to all of our Conversationalists for sharing their points of view with us. Let’s keep the conversation going! How can we talk about gun violence prevention with our family, friends, and peers in other spaces? How can we support survivors in our lives? Join us in Geneva and follow The Conversationalist on Twitter, Instagram, and TikTok to share your thoughts and stay up to date with all of our future events.