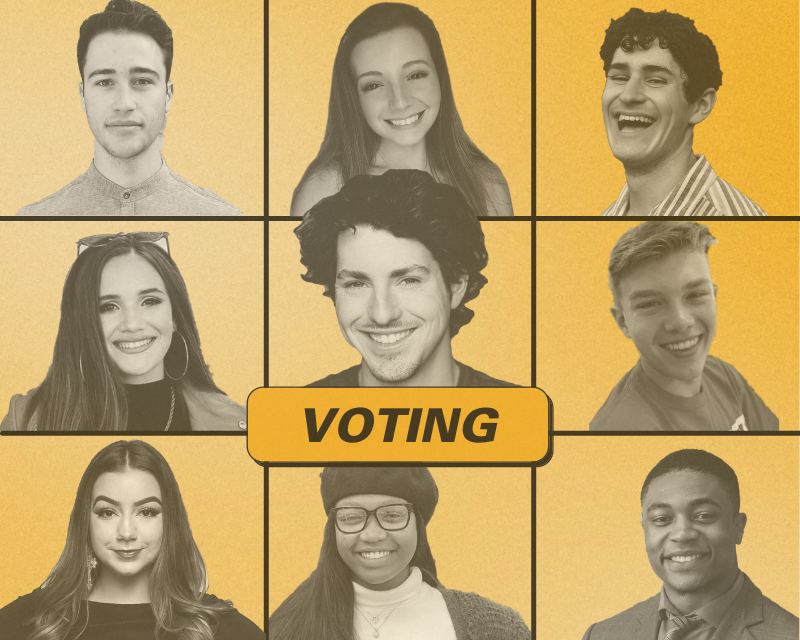 In 2016, 138 million people voted in the presidential election- less than 60% of all eligible voters. But this year, Gen Z had the opportunity to impact voter turnout, making up 40% of eligible voters. And on November 3rd, Gen Z played a vital role in the increase in voter turnout and showed enthusiasm about the civic process in the weeks and months leading up to election day.

On Oct. 6th, less than one month before the 2020 election, The Conversationalist Founder and CEO, Sophie Beren, spoke with Sean Flynn and a group of Gen Z panelists about the power of voting. Each panelist talked about the importance of mobilizing young people to get to the polls and the causes that matter most to them.

The Conversationalist presented this panel in partnership with betr Media, a media company dedicated to discovering and sharing stories that matter. At the top of the conversation, Sophie announced the launch of the Use Your Voice campaign.

Sean Flynn is an Australian-American actor, singer, and producer best known for playing Chase Matthews on Nickelodeon's Zoey 101. “I’m very passionate about voting itself because, as you may or may not know, it’s one of the greatest privileges we have as a citizen in this country,” he said. With that, he and the panelists jumped into the conversation.

Why is it important to vote?

Bianca Herrera, a student and Campus Election Engagement project fellow at Nova Southeastern University, said that she votes to honor the past. “Not everyone, especially women of color, was able to vote at one point in time in history,” she said. So I honor the suffrage movement by voting as a person of color and a woman of color.”

Jumping off Bianca’s point, Mariah White, a senior at Clark Atlanta University, emphasized the importance of voting and using your voice as a person of color. “Voting is how we can seek our goals,” she said.

“It's important that we have a say in our country's government unlike a lot of other places around the world where you're just given what you're given, and you do not influence what goes on in your life,” said Anthony Dean, a junior at Osborn Park High School.

High school student and social justice advocate Diana Fernandez is too young to vote. But her parents, who immigrated from Cuba, will be voting. She said they came to the United States to pursue the American dream and escape an oppressive government. By choosing not to vote, you are doing a disservice to those who can’t, she said.

Conor Sanchez-O’Shea, a graduate of Northeastern University, voted for the first time in 2016.
“Our leaders impact everything, and voting is a powerful way to say who gets to make those decisions,” he said.

Do you think more people will come out this year?

Conor, who founded a non-profit, Up to Us, centered around Gen-Z voter turnout, said turnout among young people is already increasing, following an increase in registration following the Black Lives Matter protests. Early voting, he said, is already happening in record numbers.

“The nation's attention has been refocused through everything we're facing right now with the pandemic,” Callie Burgan, a junior journalism major at the University of Pittsburgh at Johnstown, said, following up on Conor’s point. “People are eager for political engagement, and I think the pandemic has heightened people's awareness of how their vote matters and what kind of an impact they can have.”

Nicholas Kaplan, a junior who attends Broad Run High School, said people have taken voting for granted, but they understand the power and the importance of making your voice heard.

Activist Quentin Watts agreed with everyone. “People are pushing to get involved and figure out what they can do,” he said. “I think it's really up to us to keep our foot to the pedal and to keep voting.”

What issue is driving you to vote?

Mariah is fighting against voter suppression in Georgia, where she has been working on voter registration for two years.  “Recently, from our last election, we had closed polls, long lines, machines that weren't working, lack of backup paper ballots,” she said. “ I'm getting training to be a non-partisan poll Watcher, and I'm volunteering at other non-pro nonpartisan organizations to encourage people to go to the polls despite all the things that have happened in Georgia.”

Sean, who currently lives in Atlanta, said he has seen many of these issues firsthand.

Anthony is too young to vote, but he said he would vote to maintain the constitution and the ideas that the founding fathers fought envisioned.

Diana is currently working as the Director of Finance for the youth-led climate movement, Zero Hour, which is the issue that most heavily influences her. “At the end of the day, like every panelist here stated, you know your vote is your voice,” she said.

Personally, Nicholas said he is concerned with climate change and social injustice. But he also emphasized the importance of encouraging everyone, regardless of who they support, to use their voice and vote.

Echoing Mariah’s last point, Callie said she is concerned with voter suppression. “It’s not that people don’t care,” she said. “It can be difficult to get to vote.”

Based on his experience in college, Quentin said he is concerned with economic justice and gentrification. He also agreed with Anthony about the importance of preserving constitutional ideals, particularly free speech.“My university is only six percent black and even less with other minorities,” he said. “You go into the community [and] you see the stark disparity of how the school looks a certain way, but the community looks another way.”

As an equal justice advocate, Bianca said she is led to vote by issues that concern minorities, such as housing, medicare, and climate change. “To be a part of a community like The Conversationalist allows me to get different perspectives from Anthony and Quentin,” she said. “I've learned a lot even just through this panel, and so I enjoy having these conversations that take off the labels and just discuss true values and  perspectives from real people, diverse people, and young people.”

Sean thanked the panelists for their thoughtful perspectives. “With you guys in the mix, how could we go wrong,” he said.

Quentin added that while voting is important, it’s also important to engage in direct action, mutual aid, and outreach.

“I don’t want the future to suck,” Conor said. “It’s up to us to use the privilege we have to use in the future.”

Mariah encouraged everyone to visit Votesmart.org and to text “Ignite” to 33777 to create a personal voting plan and learn about issues and candidates in their local area.

After saying goodbye to the panelists, Sean joined Sophie for a Q&A session where he spoke about his takeaways from the panel, the issues that matter to him, and of course, his iconic run on Zoey 101.

“I'm feeling inspired,” he said about his experience on the panel. I feel hopeful. I mean, this is good. It's not that I didn't have faith in the younger generation, but I certainly do now.”